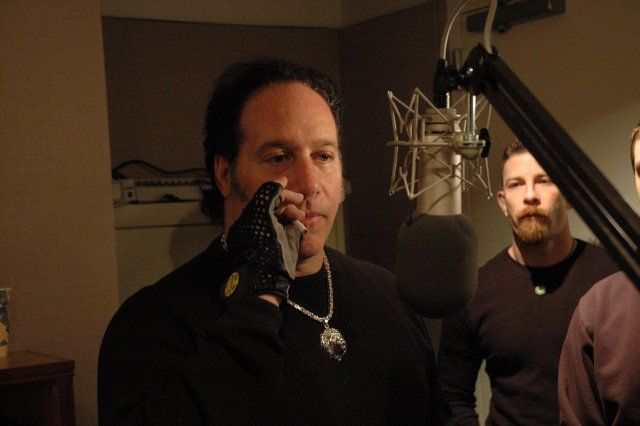 Before Andrew Dice Clay made his return to the show after a nine-year absence, Howard went around the room to see how people thought the interview would go. While Scott didn’t think Howard’s visit with Dice would go well today, Ronnie and Artie both felt otherwise. Gary added that he believed the issue would go unresolved and Fred commented that he thought Dice would start off friendly, but that his discussion with Howard would eventually take a turn for the worst. Robin speculated that she believed Dice would be “a good guest” so that he would be booked again on the show. Gary then reported that Dice requested that only Howard and Robin be present for the first part of his interview, explaining that he didn’t want people like Artie ganging up on him. Artie noted, though, that he’s a big fan of Dice, and that he saw him in concert eight times in one week in 1989 – so he would not be doing any ganging up.

When Andrew Dice Clay came into the studio, Howard pointed out that he had gotten divorced since they last spoke. However, Dice told Howard that he wasn’t on the show this morning to discuss his ex-wife, adding that he wanted to talk about their falling out. Dice acknowledged that he has continued to listen to the show regularly despite their personal relationship and, at one point, it dawned on him that they needed to reconcile their relationship. Given this, Dice said he tried to book himself on the program while it was still on KROCK, but that Gary told him Howard didn’t want him coming in at that time. Gary then got on his intercom and explained that he asked Howard about Dice’s potential appearance, but that Howard was still too upset to see him, which Dice said he understood. Dice went on to comment that he came to realize that someone came between him and Howard and that their friendship shouldn’t have ended just because of that.

Howard turned for a moment to Dice’s recent appearance on CNN, where he cursed out the guy interviewing him before storming off the set. Dice responded that the reporter accused him of not being on top of his game, which he felt suggested he didn’t prepare for the interview. Dice added that the guy also asked him if he owned a gym and he took that as him “playing” with him. Although Dice acknowledged that the guy had a point because he wasn’t selling out Madison Square Garden anymore, he once again noted that he wasn’t treating him with much respect. Dice then mentioned that he didn’t get in trouble for his reaction to the interview and that no one from CNN contacted him about it.

Dice announced that he remembered how his feud with Howard began and he wanted to tell his version of it. Dice said he was excited before his last in-studio appearance, but that Howard started taking phone calls after just a few minutes of the interview. Dice commented that Chaunce Hayden called him right after his last appearance on the show to do an interview for his “magazine” and that he told Chaunce that he thought Howard was “a little weak” during their conversation. Dice went on to say that, a few days later, he tuned into Howard’s show and heard Howard “going nuts about him.” After hearing Howard’s comments, Dice mentioned that he called Gary and asked, “When is the war going to happen?” Dice added that he called into the show days after his in-studio appearance to confront Howard about his remarks and that Howard “beat the sh*t out of him.”

Dice then commented that Hayden was the one who came between him and Howard and that he should’ve talked with Howard about their argument before the tension between them escalated the way it did. Following Dice’s recollection of what happened, Howard said he had some thoughts to offer about the incident as well. Howard said that Dice had always been a good guest, but that the appearances he made on the show before his last sit-in weren’t as great as some of the earlier ones had been. Because of this, Howard noted that he told Gary to hold off for a while on booking Dice again so that he could build up some material for his next interview, which he said didn’t happen. Howard added that he never intended to make his feelings about Dice’s appearance public, but that he had no choice but to do so once he heard Dice badmouthing him in the media. Howard acknowledged that, while he was willing to take some of the blame for the interview, he didn’t appreciate receiving all of it. Howard noted that it was these comments that Dice made that set him off.

Dice recalled that, back in the day, he and Howard used to make prank phone calls to people at all hours of the night, which he said he loved doing. Dice also brought up that Howard took him to look at homes on Long Island when he was in the market for one. Dice explained that he was interested in videotaping things he did back then, so he used to bring his video camera with him to the houses so he could capture some of his behavior, which included hiding in bathrooms and yelling at the real estate agent Howard had introduced him to. Howard acknowledged that Dice used to act crazy in the houses and added that his antics used to upset him because of his relationship with the real estate agent. Howard recalled that Dice also refused to go through with a real estate deal at the last minute just because the lawyer’s office where he was to sign the contract had “voodoo dolls” in it. However, Howard pointed out the pieces were actually expensive pieces of African art and had nothing at all to do with voodoo.

Dice noted that Howard wasn’t the only person he’s had a feud with in the past. To illustrate his point, Dice said that he and his younger son, who was 10 at the time, went to the Comedy Store one night and Pauly Shore demanded that he get the kid “the f*ck out” out of fear that the police would shut down the club because of the presence of a minor. After Dice mentioned that Pauly’s argument was flawed because Pauly essentially grew up in the Comedy Store since his mother owned it, he said he confronted him for swearing in front of his son. Dice added, though, that he and Pauly have since cleared up their situation.

Dice reported that another person who crossed his path was Jay Mohr. Dice recalled that, after he had hit his pinnacle of success, his son approached him and wondered why he didn’t do shows at Madison Square Garden anymore. Dice said that his son’s question got him to thinking and he told his then wife that, within a year, he was going to perform again at MSG. Dice added that his goal inspired him to record a new comedy album and that he was able to hold a concert in front of 13,000 people at the Garden within eight months of his son’s remark. Dice noted that his younger son wasn’t allowed to watch his act because of its subject matter, but that he still was able to take in the atmosphere of having that many people show up to see his father. However, Dice said that he gave his other son permission to watch some of his routine. Despite the positive outcome, Dice said that he faced obstacles before performing at MSG. Dice commented that he appeared with one of his sons on The O & A Show and the hosts went out of their way to be confrontational with him just to make his son uncomfortable. Dice then said that Jay Mohr, who was friends with the other two, made some anti-Semitic remarks about him around this time, which led to him challenging Mohr to meet him face to face. Although Dice admitted he wouldn’t have gotten physical with Jay, he added that Jay apparently feared otherwise. Dice explained that, right after he issued his challenge, he received calls from Jay’s wife, as well as a New York detective, trying to straighten out the feud. Dice said that he dropped the matter after getting those calls, but that he approached Jay when he ran into him years later at a comedy club. Dice mentioned that, after he got “uncomfortably close” to Jay while talking about their dispute, they were able to settle their differences.

Howard acknowledged that it couldn’t have been easy for Dice to call the show again the way he did, so he appreciated the gesture. Howard also noted that Dice came into the studio and explained himself well and that he no longer has hard feelings toward him. However, Howard added that he wasn’t sure if he and Dice will ever be able to have the same friendship they once shared. Robin then pointed out that she remembered that, when Dice was in his heyday, he agreed to be on Howard’s birthday show and that she’ll be forever grateful to him because of it. Dice responded that he thought his and Howard’s lives have paralleled each other and he knew they needed to talk again because of the bonds they share.

Howard announced that, while Dice was saying his goodbyes, Benjy tried to kiss him. Benjy responded that he and Dice shared “a nice hug” and that attempting to kiss him just felt natural. Benjy added, though, that Dice “flipped him over” as he tried to make his move. This led Robin to mention that she recently saw Benjy chasing Carl White of The Howard 100 News around the studio trying to kiss him as well, while Scott the Engineer came into the studio and reported that he had a Benjy story of his own. Scott commented that, as he was walking down the street yesterday, Benjy began yelling from a cab window, “The Scott Salem curse.” When Scott added that “the black guys” walking beside him screamed back at Benjy, Howard informed Scott that he didn’t know how to tell a story. Howard then explained that Benjy actually yelled “black cloud” from the cab, which he said was a reference to a story Scott told yesterday about his family’s luck and that the people walking next to Scott assumed he was making racist remarks about them.