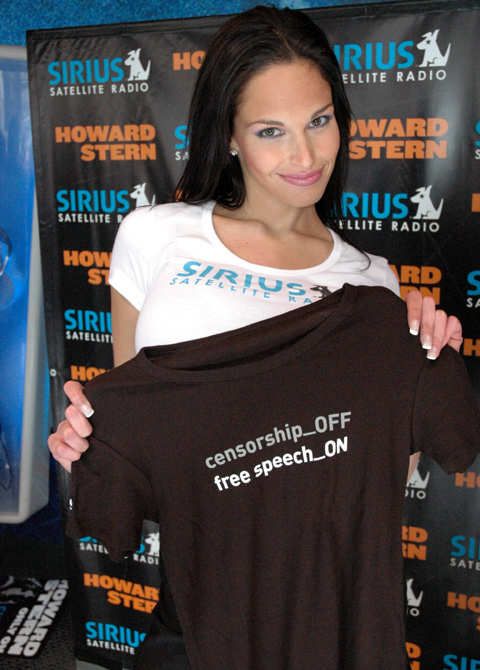 Howard began the show by addressing a controversy involving a radio personality on KTRS in St. Louis. Howard explained that one of the city’s radio personalities, Dave Lenihan, was fired after making a racial epithet on the air while discussing Condoleeza Rice’s potential run for president in 2008. Howard then played a clip of the incident in which Dave accidentally said that having an African American as president would be “a big coon,” instead of “a big coup.” Dave immediately apologized for his slipup and claimed he wasn’t racist in any way. However, in the next portion of the clip, KTRS’ CEO, Tim Dorsey, announced that Dave made “a most unfortunate racial slur,” before apologizing to both Condoleeza and the station’s listeners. Tim added that, since “there’s no place for those kinds of comments in this world,” he decided to fire Dave. Robin responded to the tape, noting that what Dave said probably wasn’t offensive to anyone, especially because he said he was sorry for using the word. Robin added that Rush Limbaugh faced no repercussions for “accidentally” referring to New Orleans’ Mayor, Ray Nagin, as “Mayor Nagger” on his show, so she didn’t think Dave should’ve been reprimanded in any way for his comment.

Benjy pointed out that, since KTRS is a sports talk station, its personalities probably talk about the Cleveland Indians on a regular basis, which he said is a team nickname that offends some people. Given this, Benjy claimed that there are no differences between the slurs, yet Dave was the only person to get in trouble. Robin replied, though, that Benjy’s premise was “thin,” while Howard dismissed it completely.

Howard got Dave Lenihan, the radio guy from St. Louis, on the line and assured him that he said “absolutely nothing offensive” about Condoleeza Rice. Dave explained that, because he was addressing the recent rumors about Condoleeza’s alleged interest in becoming the next commissioner of the NFL, he merged the word “coup” with the “N” in NFL, and that was why he said “coon.” Dave went on to report that he likes Condoleeza and wants her to run for president, which prompted Howard to tell Dave that he should’ve been fired from KRTS for his political views but not for his slipup, he added that he thought there was a chance the station’s CEO, Tim Dorsey, was looking for an excuse to fire him. Dave informed Howard, though, that he had been working at KRTS for just two weeks before he was let go, so he didn’t believe he was fired for low ratings.

Howard said that he didn’t think Dave was standing up enough for himself. Dave replied that he’s been trying to accept the consequences of his action, but acknowledged that his firing would put a damper on the run for congress he was considering in the future. After finding out that Dave didn’t know of any African Americans being employed at KRTS, Howard recommended that he hold a press conference and point out how hypocritical the station’s reaction was to his remark given its hiring practices. Howard took a number of calls from listeners who suggested that Dave was backing down too easily. When one of the callers wanted to know if Dave was married, he said he was. Howard then had Dave give the phone to his wife, Karen, so he could ask her about the incident. Karen told Howard that Dave has never used racial epithets in the past and that he’s done interviews since he was fired in an attempt to clear his name. After hearing this, Artie replied that, the next time Dave talks to reporters, he should avoid using any words that end with “oon” or “igger,” just to be safe.