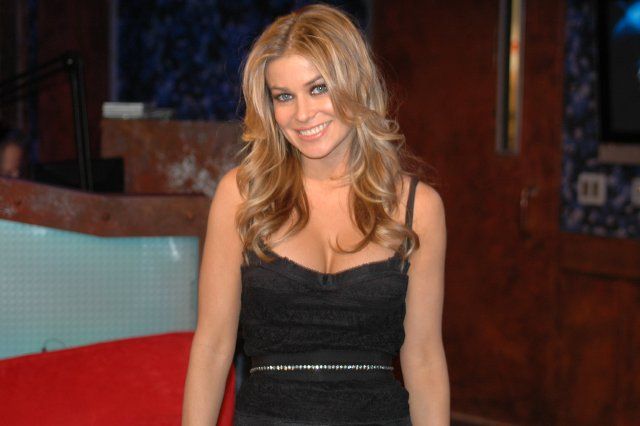 When Carmen Electra came into the studio, Howard pointed out that she was “finally” thinner than her husband, Dave Navarro. Carmen replied that she now weighs about 107 pounds, which Howard acknowledged was exactly the weight he was going to suggest to her.

Howard then asked if Carmen thought it would be “weird” if he dimmed the lights and pleasured himself to her – which she said would be fine with her. However, Howard thought Carmen seemed uptight and Robin commented that it might’ve had something to do with rumors she’d heard about Carmen and Dave possibly breaking up.

Carmen laughed off the gossip, though, assuring Robin that “she and Dave are good.”

Carmen reported that she was an original member of the Pussycat Dolls, but that she had to leave the group when it signed its record deal, because she wasn’t offered enough money.

Carmen then explained that, prior to the record deal, she worked with the Pussycat Dolls for free, but that, since there was no record contract, she wasn’t forced to perform or sing if she had other engagements.

Carmen added that she now performs with a group called the Bombshells and that she recently sang with them at a lesbian-themed concert.

After Carmen showed Howard that she was wearing both a thong and a regular pair of panties, she admitted to him that she recently made out with a woman in France.

Carmen recalled that, at the time, she and the woman were on a talk show, and the host of it asked if they’d kiss. Carmen said she informed the host that she’d kiss the woman only if he made out with a man, which, much to her shock, he did.

However, Carmen acknowledged that her kiss with the woman didn’t involve any tongue and that it was “lame.”

Carmen mentioned that she has a cameo in “Scary Movie 4,” which she said opens next Friday, before telling Howard that she flew into the city last night, but that she didn’t go out. Carmen reported that, instead, she took a bubble bath and went right to bed.

When Howard wondered if Carmen shaves herself, she replied that she gets waxed by a professional in Los Angeles and that the woman who does it actually rubbed her legs and rear end once in an “almost sexual” way.

Carmen noted, though, that she let the woman go through with her touching because she didn’t want to offend her by telling her to stop.

However, Carmen went on to claim that, in the past, she’s pleasured herself while thinking about Howard and that his presence – even if it doesn’t necessarily involve sex – in these fantasies was enough to get her excited.

Howard responded that he was surprised by the news, adding that most women think of him when they want slow down.