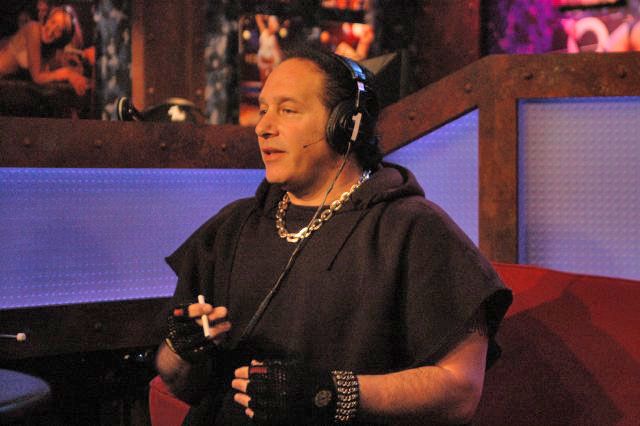 Andrew Dice Clay came into the studio for the second time this year. Dice told Howard he was stopped by police officers in New York following his last appearance and they offered to give him a ride because they thought he was so good on the air that morning. Howard responded he has gotten back his integrity since he moved to satellite and believes more of his former audience will join him in the future. Dice added that Howard leaving regular radio caused people to come up with a new moniker for the service – “terrestrial radio” – which he said couldn’t be a less appealing name.

He Wants His MTV

Howard asked Dice about the lifetime ban he earned in the 1990s from MTV. Dice recalled he was scheduled to introduce Cher at an MTV awards ceremony and was backstage watching comedians like Paul Reiser and Richard Lewis “bomb” because their acts didn’t mesh with “the rock and roll crowd” in attendance. Dice recalled that Hot Tub Johnny asked him if he wanted to be “a teardrop or a tidal wave” when he took the stage. To make maters worse, Dice found out at the last minute he was going to be paired with Aresenio Hall in order to kill time. Given this, Dice decided to perform some of his X-rated nursery rhymes onstage before introducing Cher, which incensed MTV execs to such an extent they banned him from the channel forever.

Know When to Cool Down

A caller wanted to know if Dice would ever consider moving to Florida. Dice replied that he lived there once, but would never do it again. He explained that he rented a condo in Boca Raton 15 years ago and one day he was drinking a Slurpee by his building’s pool. Dice said that a 90-year-old man was the only other person by the pool at the time and, while he was relaxing, the man yelled at him for having a drink in a restricted area. Dice said he told the man he essentially had a cup of ice so there wasn’t a chance of him making a mess, but also commented the man approached his chair and kicked it because of the cup he was holding. Dice acknowledged he thought the man was part of a joke, but quickly learned, when the man pushed him, he was mistaken. Because the man got physical with him, Dice reported he ended up pushing him into the pool, an act his wife witnessed. Dice then noted he had a hard time giving his side of the story to his wife because of the age of the man he pushed into the water.

Howard brought up controversy surfaced last time Dice was on when Benjy attempted to kiss him after his appearance. Howard advised Benjy not to do it before he tried to kiss Dice, but Benjy thought he was actually encouraging him to go through with it. Benjy said he decided to kiss Dice because he thought they “shared a moment,” which Dice replied wasn’t the case. In fact, Dice also said he was ridiculed by people when he returned to California because of the incident, but Benjy claimed he went through the same thing himself. After Dice pointed out he wasn’t gay, Benjy informed him he wasn’t either, but acted on his urge to kiss Dice because of the connection he felt they had. Although Benjy insisted he wasn’t attracted to Dice and didn’t mean anything by his advancement, Dice was so upset that his bodyguard, Happy Face, came into the studio to calm down the situation.

Howard revealed two days after Benjy tried to kiss him, Dice called Gary and reported if he hadn’t found out that Benjy was part of the show, he would’ve fought him. Dice then explained part of the problem he had with Benjy was he didn’t know who he was until after he made his move. Dice added that Howard used to play practical jokes on him in the past using members of his staff, but the difference was he always recognized those people so he was aware of what was happening.

How About a Hug Instead

After Benjy said he’d be willing to fight Dice if he wanted to schedule a bout, Dice demanded he “take it back.” Benjy responded he didn’t know what Dice meant by his remark, which led Dice to tell him he’d “knock the teeth through the back of his f-ing head” if he attempted to kiss him again. Benjy assured Dice he no longer wanted to kiss him, but also admitted he did want to hug him, but would only do so if Dice gave him permission.