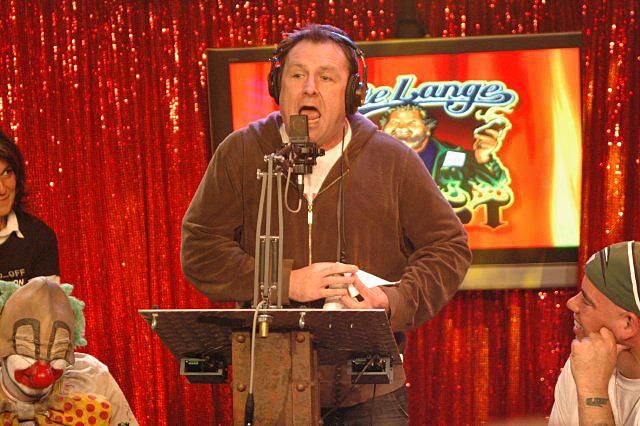 Colin Quinn was the last roaster and he began his set by saying the festivities had gone so well he was sure the Rev. Bob Levy couldn’t have been responsible for putting them together. After claiming that membership in the KKK went up 30 percent after how badly Daniel Carver’s roast went, Colin noted Lisa Lampanelli has “so many black guys lined up for her it’s like she’s selling Madden 2007 out of her p*ssy.” Colin then mentioned Shuli looked like “an unhealthy Ben Kingsley,” Fred resembled “a retarded Gary Oldman” and Robin was the only woman he knew who made “booty calls to Fresh Direct.“

Colin next told Ronnie the Limo Driver that he better resembled “a trophy for the Best Bodyguard award” than an actual bodyguard itself, a joke that brought cheers from the audience. Colin said he listens to the show every morning and that he wished Howard would start reminding his listeners more often how much he enjoys being able to say anything he wants since he moved to satellite. Colin also admitted he felt like “an f’ing retard” for having laughed at the show for the past 23 years even though Howard has since claimed he wasn’t funny during that time due to the FCC regulations he was facing.

Colin went on to say he was convinced Gary hired that homeless man who attacked Howard two months ago to do so just so he’d have something besides “Dancing with the Stars” to talk about the next morning. When Colin got to Artie, he recommended he become more active, and that “heart palpitations from bad coke don’t count as cardio.” After Colin added he heard Dana hurt her ankle and wondered if it was a result of her “kicking Artie to the curb,” he said he had more Artie jokes, but was saving them for his wake. As Colin took his seat, Howard noted that he received the only standing ovation from any of the show’s four roasts.