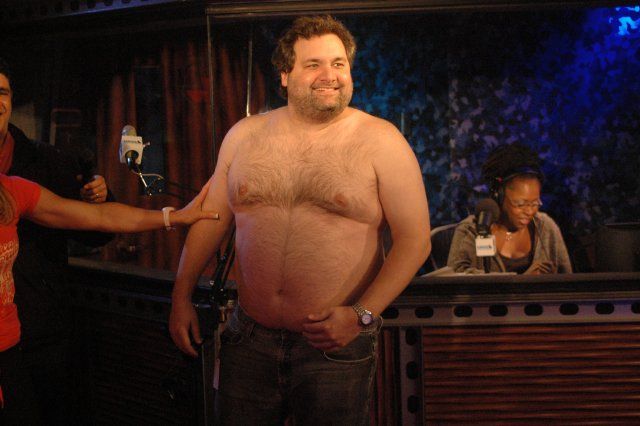 As Doug Goodstein was in the studio talking about Howard TV, Artie got on the line and said “something kind of funny happened yesterday” with his “Entourage” make-out partner, Leslie Bibb. Artie noted Leslie should win an Emmy because she was doing a good job pretending she was attracted to him for the show, before adding the weight he gained in the past few months actually helped make his relationship with Leslie’s character even funnier than the producers thought it’d be.

Artie next said his plane had to make an emergency landing on Tuesday in Phoenix, where it was stuck on the runway for five hours because of a blackout that was occurring in Los Angeles. Given this, Artie commented he didn’t get to Los Angeles until 2 a.m. on Wednesday and had to be on the set at 7 a.m. As if that wasn’t bad enough, Artie mentioned he was embarrassed because none of the clothes the wardrobe assistant gave him fit, and he had to sit in his “tighty whities” while she tried to find bigger shirts and pants. Despite this, Artie acknowledged his situation got better quickly not only because his first scene involved him rubbing suntan lotion on Leslie, but also because she improvised kissing scenes with him that she didn’t have to do.

Artie added, after Leslie gave him permission to “spank her ass” during another take, his “gut” prevented her from seeing the erection he was beginning to get because of the contact he had with her. Artie went on to say Jeremy Piven, the star of the show, advised Artie to “bite Leslie’s ass” during the next take, which he asked her if she’d allow, and she gave him the go-ahead. Artie then said he “took a bite out of her ass,” explaining he pulled her “ass apart like a tiger,” which caused her to scream. In fact, Artie said he was so rough with Leslie that it looked like he gave her a hickey. Artie mentioned Leslie was nice to him, but he knew she wasn’t interested in getting to know him off the set, especially because she reminded him every chance she got that she was dating a doctor.