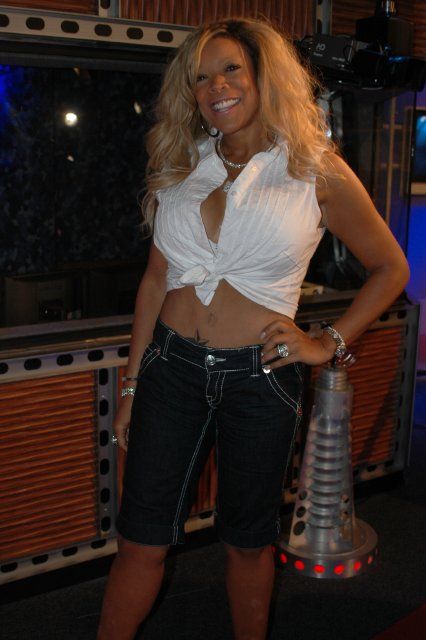 Wendy Williams, a New York disc jockey, came into the studio, and right away admitted she used to have small breasts before she got implants. Wendy then commented she was married to a black man, noting she’d never been attracted to white men in a physical way. Wendy also reported her husband started out his career working as a beautician, but has since taken over as her manager.

Howard mentioned Wendy’s husband cheated on her while she was pregnant, and he wondered why she took him back. Wendy responded that she didn’t condone cheating but understood her husband’s actions because of the amount of bed rest she required at the time, as well as the fact that she had gained 103 pounds because of it.

Wendy went on to say she overheard her husband talking to his mistress on the phone, which was how she found out about the affair, and confronted him about it. Wendy then said since her husband wasn’t “a bitch ass” he acknowledged the affair instantly, and added she was confident he has been faithful to her ever since.

Gary proceeded to say Wendy was married prior to getting together with Kevin, and she said she left the man without telling him after he went to work one morning. After hearing this, Howard wondered if Kevin’s former mistress was attractive, but all he’d say was she was “the exact opposite” of Wendy, although he also revealed he met the woman at a bank and had sex with her in a hotel room. However, despite his indiscretion, Kevin said he never considered leaving Wendy.

Gary reported Wendy used to have a cocaine habit, and she admitted it was true. Wendy explained she grew up being called “white girl” because of her “squeaky clean” image, so she decided to try drugs in order to rebel.

Howard then noted the nickname Wendy had in school probably wasn’t just because of how she behaved, but also because she “almost looked Italian” as well. Howard next commented Wendy supposedly badmouthed Robin during one of her broadcasts, but she said the story wasn’t true.

Wendy did admit, though, she mentioned on the air last year how surprised she was that Robin discussed the talk show she was developing with SONY before it was officially picked up seeing as how deals don’t always come to fruition. Before the interview ended, Wendy and Kevin presented Howard with bottles of champagne made by the company they own by using women who work for the modeling agency the couple runs as well.

Upon seeing the models, Howard asked Kevin if he was the one responsible for choosing the models, but he replied his opinion was one of many used in making such decisions.