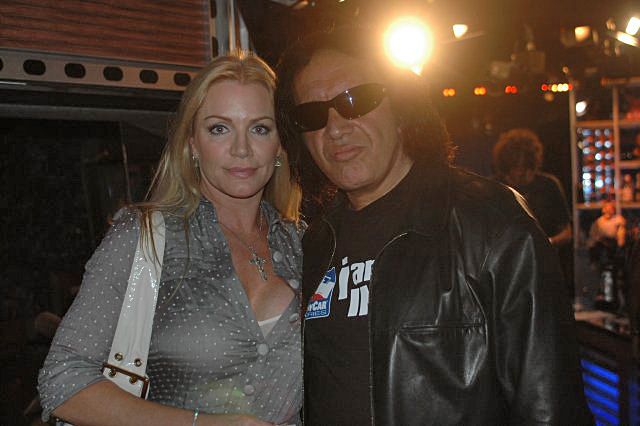 Gene Simmons and his longtime girlfriend, Shannon Tweed, came into the studio for their first appearance together on the show. After Howard mentioned Gene and Shannon had a new reality series, “Gene Simmons Family Jewels,” set to debut next week, he wondered why they decided to share their lives, and Gene responded he felt it was time for them to reveal more about themselves to their fans. Howard went on to reveal that Gene was worth $250 million, so he asked how the business of KISS worked.

Gene explained he and Paul Stanley were co-owners of the band, and that they’re constantly making money through concerts and other business opportunities. Gene went on to admit KISS was guilty of playing a number of farewell tours throughout the years, while also calling himself “a whore” when it came to money.

Gene noted he lived with Cher when they were young, which led Shannon to recall she recently had to write Cher a letter asking her to stop contacting him. Gene then said he thought Cher was “a great woman,” even though he noted he didn’t know why she still contacted him 23 years after their relationship. This led Howard to wonder if Shannon ever had sex with Hugh Hefner, which she acknowledged she did when she used to appear in Playboy. Shannon also remembered she had sex with other men and women while she was with Hef, although she claimed she no longer engaged in such behavior.

Shannon told Howard she decided to write Cher the letter warning her to leave Gene alone after her son accidentally read a note Cher had sent Gene. Shannon went on to say she believed Gene broke up with Cher because he was with Diana Ross at the time as well, an accusation Gene didn’t deny.

When Gene next denied having ever cheated on Shannon, Howard took a call from Wendy the Retard, who claimed she had sex with Gene as far back as the 1970s and as recently as last night. However, after Wendy noted she and Gene had been having sex for “a century,” Shannon didn’t seem to believe Wendy was telling the truth.

Howard asked Gene if he’d ever agree to get married to Shannon if she really wanted it, but he said that wouldn’t happen because he didn’t think she “defined herself by her man.” Shannon, however, said she was interested in getting married, but added she wasn’t expecting it to happen anytime soon.

Gene proceeded to say he had Shannon sign a cohabitation agreement before they really started dating, which she admitted was an awkward proposition given how new their relationship was at the time.

Sal came into the studio and asked Gene if he remembered the time he threw him out of one of KISS’ concerts, which he did. Sal recalled, on the night in question, Gene was getting ready for the part of the show when he gets lifted into the air by cables, and he started making faces at Gene from the crowd. Sal added, once Gene got back on the ground, he ran to the back of the stage like a “retarded Godzilla” and, before he knew it, a security guard grabbed him and demanded that he leave the arena, letting him know that if he didn’t he’d probably be fired.

Sal then said, once he left the concert, the security guard thanked him for leaving without making a scene because Gene was known for firing people regardless of how long they were employed by him. Gene replied the allegation was true, explaining he expects his employees to be “on the top of their game” at all times.

A caller brought up that Gene discovered Van Halen, and he said the report was true. After telling the story of how he saw the band at a club and signed them immediately following the show, Gene said he “ripped up the contract” he made with the group’s members because no one else believed in them the way he did. This led Robin to continue yesterday’s conversation about musicians by asking Gene who he thought were the greatest guitarists of all time, and he named Jimi Hendrix, Eddie Van Halen and Pete Townshend as some of his favorites.