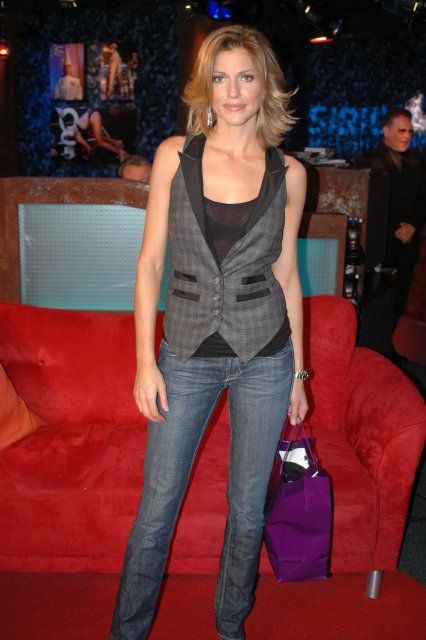 Tricia Helfer, one of the stars of “Battlestar Gallactica,” came into the studio, and Howard explained that he found her to be one of the “hottest” women in Hollywood.

After talking about how she went about memorizing lines for her show, Howard admitted he pleasured himself to one of Tricia’s love scenes in “Battlestar Gallactica,” which she responded was “a compliment” to her. Tricia then said she knew what scene Howard was talking about, and added the day she shot it was one of the few days her husband was on the set. This led Tricia to mention her husband was an entertainment attorney, and that they met through a mutual friend.

Tricia also reported she had sex with her now husband after their third date, and also acknowledged she was into “role playing” and “being tied up” during sex.

Ready to Show It All

Because Tricia is on the cover of February’s Playboy, Howard asked her if the experience was difficult for her. Tricia replied, though, that it wasn’t, and that she found the photo shoot to be “fun” and “exhilarating.”

Tricia added she was approached by Playboy two years ago to appear in the magazine, but she declined initially, explaining she wanted to establish herself as an actress before she took her clothes off.

Let the Men Do the Talking

Tricia acknowledged she once kissed a girl, and that she did it out of “curiosity.” Tricia also admitted she has had sex in public, remembering a time she did it on a balcony at a hotel in Italy. This led Tricia to say she sometimes “talked dirty” during sex, but that she preferred to have her partners be the vocal one instead.

All Races Are Welcome

While discussing how her sisters had bigger breasts than she did, Howard asked Tricia if her breasts were real, and she responded that, if she had implants, they’d be bigger. Tricia then reported she grew up on a farm, and that she was “promiscuous” when she was young, losing her virginity when she was 16.

Following Tricia’s appearance, Robin pointed out she knew Howard was “into her” because of the way he came out from behind his console to say goodbye to her.

However, Howard replied that wasn’t the case, adding Tricia was married, and it was “like he was married.” After Robin informed Howard that she was watching him and Beth during Bubba’s wedding, and that they were giving each other “looks” throughout the ceremony, Howard admitted the two of them had discussed the possibility of marriage.