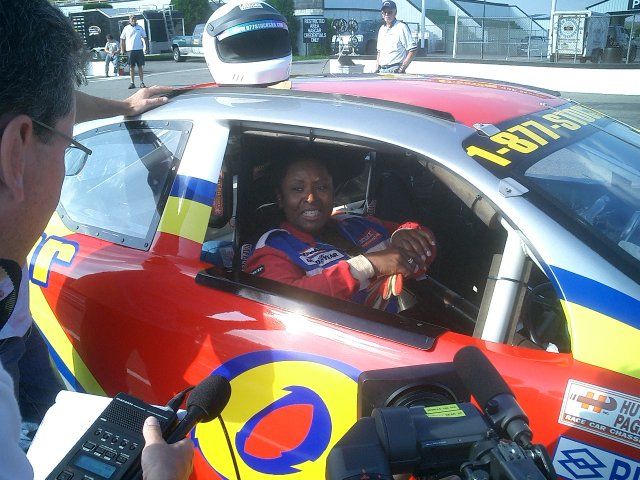 Howard started today mentioning a discussion that occurred on yesterday’s “Wrap Up Show,” and he played a clip of it. In the tape, Gary said he didn’t think Robin would stick with her latest hobby, race-car driving, adding he felt she was already bored with it and would quit because she wasn’t automatically a good driver.

Robin responded to the clip, though, by insisting she wasn’t going to stop driving anytime soon, and that Gary’s guess was, in fact, wrong.

One Leg, Dead Animals, and Breasts

A caller brought up the premiere of “Dancing with the Stars,” and Howard noted he believed one of the show’s contestants, Heather Mills, was “looking for love” by appearing on the show given the fact she only has one leg.

However, Howard added “America still hated Heather” despite her condition, which he also said spoke to just how much people in this country still loved her ex-husband, Paul McCartney. When Howard next reported Heather made her entrance on “Dancing with the Stars” by claiming “no one in America knows who I am,” Artie replied, “Sweetheart, you weren’t married to the bass player from Babyshambles.” Howard then acknowledged he never thought he’d ever “hate someone with one leg,” but Heather somehow managed to change that.

This led Howard to say he was “turned on” by the way Beth had turned down “Dancing with the Stars” two seasons ago, adding that she even had to “justify” being a guest host on “The View” next week by telling herself she would go on to promote the North Shore Animal League.

This led Howard to talk about the news concerning certain kinds of pet food killing 10 animals, and how Beth brushes Bianca’s teeth, “cleaned her folds” and gave her mouth rinse every night.

Howard went on to say he had “ADD” this morning, switching the topic to naked photographs he saw of Bubba the Love Sponge’s wife, Heather, that appeared on Bubba’s Website. Howard then had the pictures of Heather displayed on the studio’s monitors, with Howard, Fred and Artie remarking (positively) on just how big her breasts were.

Howard read e-mails from fans criticizing Robin for the way she fawned over having met George Lucas yesterday, and the way she demanded Howard not put down “Star Wars” the way he was.

However, Robin laughed off the emails and noted she thought Howard was the one who constantly brought up his famous friends and wouldn’t let anyone speak negatively about them.

After Robin named some of those people – including Meryl Streep and Billy Joel – Howard agreed and asked that she just avoid making fun of one of his newest pals: Gayle King. Ralph then got on the line and claimed that, just nights before she met George, Robin was having a discussion with Howard and him where the three of them made fun of both George’s movies and his beard, which caused Robin to admit she wished she’d never mentioned George’s name on the air.

When Eric the Midget called in, Howard informed him tonight was another chance for Sanjaya to be voted to stay on “American Idol,” but Eric said he wouldn’t support what he was doing with the show.

Howard then read a list created by a Website of the 10 Most Important Little People of All Time, and added that Eric actually came in at number three on it. After Howard pointed out the list didn’t come from the show and was from a legitimate Website, he played a congratulatory bumper Sal and Richard made for Eric.

However, Eric noted he didn’t like the message because it used the word “midget” and not “little person” when describing him.Eric commented that, to get back at Howard for trying to make Sanjaya the winner of “American Idol,” he voted “as many times as he could” last night for Heather Mills on “Dancing with the Stars.”

Howard informed Eric, though, that he wouldn’t watch “Dancing with the Stars” if Heather wasn’t on it, so he thanked Eric for his efforts.