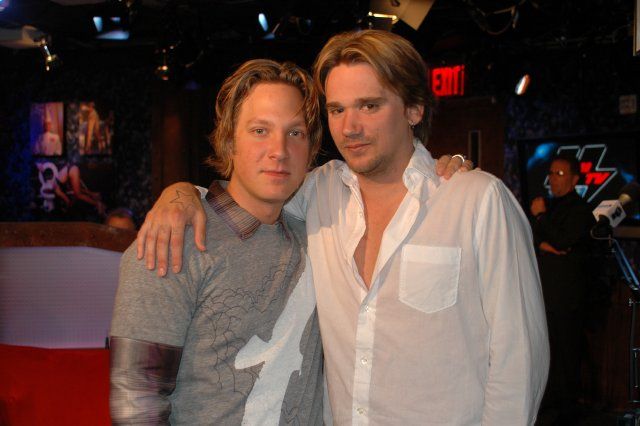 Randy Spelling, the son of Aaron Spelling, and Sean Stewart, the son of Rod Stewart, came into the studio to talk about their reality show, “Sons of Hollywood.” Howard began the interview talking to Randy, who said his father was worth $500 million, and that he had left him and his sister, Tori, “some” of it.

Randy went on to note he wasn’t sure exactly how much money he’d end up getting in his father’s will because his mother was still alive, and he insisted he needed to work in the meantime in order to maintain his lifestyle. Howard then asked Randy why he thought Tori chose to get into an argument with their father when he was so sick, and he replied he felt it was done for “entertainment purposes.”

Randy also claimed there was no “feud” between his dad and Tori, and that she wasn’t cut out of the will as some have claimed. Randy reported he had sex for the first time when he was 15, but that he never got the chance to be with his dream girl: Shannen Doherty. After admitting he once saw Tori naked, Randy recalled his initial sex partner wasn’t famous, but added he “supposedly” took Paris Hilton’s virginity a few years later.

This led Sean to claim he grew up with Paris, but that all he did with her was “put some fingers in her.” Randy then remembered the time he, Paris and some of their friends went on vacation in Palm Springs, and how Paris’ grandmother had hunted them down because Paris had snuck out in order to go on the trip with them.

When Randy revealed he recently bought a condominium with his own money, Howard acknowledged he was “depressed” that his mother didn’t help him out. Randy responded, though, that both his parents had always taught him the value of money, which was why he “wasn’t overly spoiled” growing up…despite his family’s wealth.

A Good Dad When He Was Around

Sean described Rod as “a great father,” but also admitted he wasn’t there for him very much because he was out on the road touring most of the time. Sean also said he did all sorts of drugs – including heroin and ecstasy – although he didn’t blame his parents for his habits.

Sean then commented he was trying to get clean, and that he hadn’t done any drugs in two months. Sean proceeded to say Rod warned him not to drink and drive, and added he referred to him as “dad” when talking to him, despite his absences. Sean went on to confess he used to pleasure himself to one of Rod’s ex-wives, Rachel Hunter, while she sunbathed at their house.

Sean reported he was 16 when he lost his virginity and talked about the time Dean Cain broke up a fight he was in with a guy at a club. Following the story, Artie laughed and called Randy and Sean “trouble” while Howard noted he wanted to start watching their show given their stories this morning.

Sean’s girlfriend, Caleigh, the daughter of the producer, Jon Peters, came into the studio and denied that she knew how much her father was worth. After Caleigh mentioned her dad “loved” Sean despite their age difference – Sean was 26 and Caleigh was 18 and still in high school – she pointed out they were engaged, even though she admitted they’d gone through rough times. As Robin asked questions about the engagement, Artie asked Caleigh if she’d ever spoken to a black person who didn’t work for her, and Robin replied “there were rich black people” in addition to rich white people. Caleigh then discussed some of the women her father has dated, a list that included Pam Anderson, Barbara Streisand and Catherine Zeta-Jones. Caleigh added that, because Pam and Catherine were both with her father around the same time without realizing it, she didn’t think much of relationships until she and Sean got together.