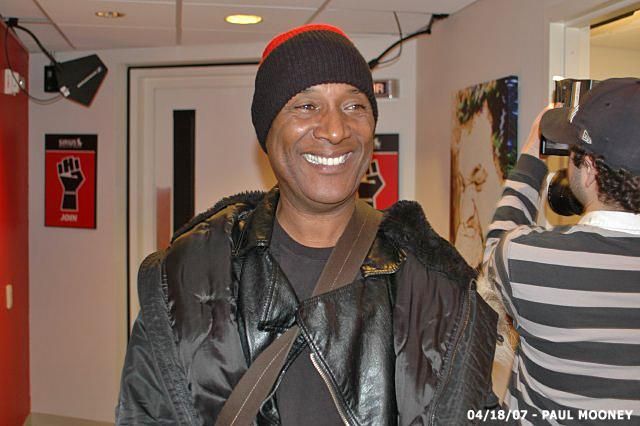 When Paul Mooney arrived, he noted he thought Don Imus should’ve been “lynched” as opposed to fired for his remarks, while adding the “new n-word” was “nappy.”

Paul then said he felt there was a difference between what Imus said and what rappers do for a living because Imus didn’t come from an environment where those kinds of words were prevalent. Paul went on to mention how he was particularly upset with Imus’ remarks given the fact that there were “nappy heads” fighting for him in Iraq, and addressed the potential racial implications that could arise from such words. Paul then predicted that America would “fall” if people didn’t start taking race relations more seriously, and added the fact that people in the rap world used certain words didn’t give people like Imus the right to do the same thing.

After Al Rosenberg called in to report he’d worked for Imus for a decade and heard him use racial and religious slurs firsthand, Howard asked Paul how he felt about Jesse Jackson’s and Al Sharpton’s own checkered pasts, but all Paul would say in response was that he believed America was to blame for the entire controversy.

Anything for White Girls

Paul announced a show he was working on, “Judge Mooney,” was supposed to air on Comedy Central, but ended up on BET because Dave Chappelle was one of its producers, and his relationship with the Comedy Central was ruined after he left his own show on the network.

Paul proceeded to call what happened at Virginia Tech “horrible,” although he also commented that it proved people would do anything for “white p*ssy.”

Paul then admitted he’d recently “slipped up” on his self-imposed ban of the use of the n-word onstage, but insisted that was part of his act. Paul next brought up a number of other racist terms for black people, and asked where they originated. This led Paul to acknowledge he didn’t know why black people were sometimes referred to as “monkeys,” explaining he thought white people looked more like chimps than black people did.

Paul revealed he wanted Hillary Clinton to be the next president because he thought she was “very smart” and was “a moneymaker.” After Paul added he respected Hillary for the way she survived the scandals surrounding her husband when he was president, he said America was “ready” for a woman president, and that he felt Barack Obama was “too skinny” to win election. Paul did say, though, that he’d like to see Barack run as Hillary’s vice presidential candidate, but that was only because, to him, it meant Hillary would never be assassinated.

No Driving While Eating

Paul recalled the time he was in a cab in New York, and that his cab driver, who was also black, was pulled over for eating a cookie while driving.

Paul brought up that he felt Madonna’s newly adopted son looked “scared” of her, which led him to discuss his own childhood. Paul recalled his grandmother used to tell him when he was 7 years old to never let anyone in her house when he was there, and that he listened to her, even when his own mother once came to the door claiming she had to go to the bathroom.

Paul then said the “whooping” he would’ve gotten from his grandmother had he disobeyed her, even to let his own mother in, was enough to make him do whatever she wanted, and added he believed it was the lack of that kind of discipline that was ruining today’s children.