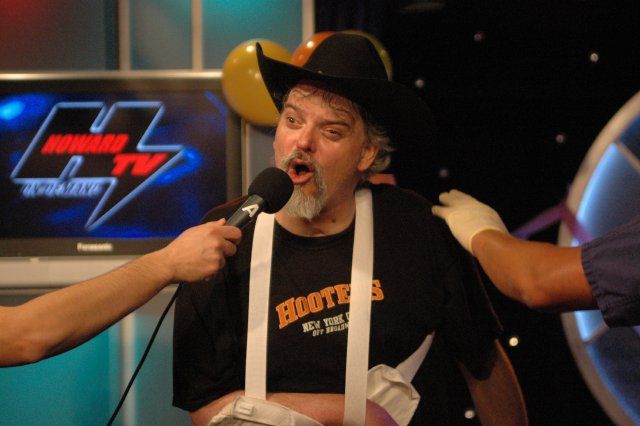 Howard acknowledged he didn’t want to see Jeff get spanked, so he instead asked him to get into a bikini and hit a piñata containing a six pack of beer, which Jeff agreed to do.

As Jeff prepared for the bit, Howard asked if he and Artie were getting along, and Artie thought Jeff was mad at him for not giving him money for doing nothing in awhile.

However, Jeff insisted that wasn’t why he was upset with Artie, adding he was angry with him because he thought they were friends, yet Artie changed his cell phone number and hadn’t given him the new one. Jeff then claimed Artie had told him they were friends, but Artie insisted he never said such a thing. Artie went on to offer Jeff $100 for his birthday, and Jeff said he’d accept the gift when he got back into the studio after putting on his bikini.

The Worst Moment Ever

While Howard waited for Jeff to change, he played clip from a recent “The Tyra Banks Show” of Tyra discussing her “So What!” movement that encourages women to celebrate their bodies instead of worrying about their appearance. Following the tape, Ralph called in to say he’d seen the episode in question, and it featured overweight women wearing tube tops that allowed their stomachs to hang out, while JD came into the studio to add he was disturbed by the images he saw on the program as well.

Since JD was in the studio, Howard got to clips from yesterday’s “Intern Show,” of JD admitting that he didn’t like it when Robin made fun of him because he felt she was “a sidekick.”

Howard then revealed JD was voted by the interns as “the creepiest guy on the show,” and JD acknowledged he knew why he received that honor, mostly because he couldn’t help but staring at their chests.