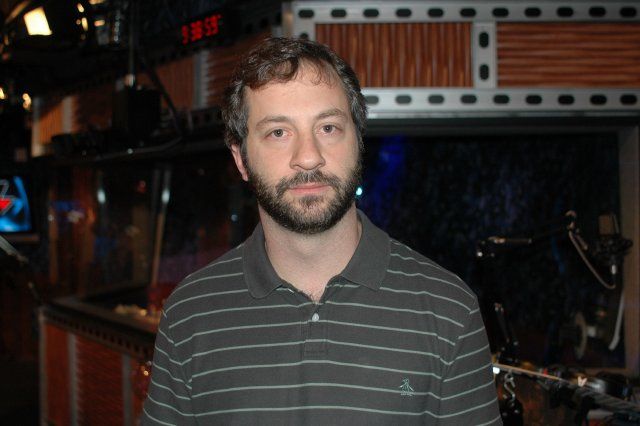 The first thing Howard asked the next guest, director Judd Apatow, was whether he got upset that “The Cable Guy” tanked. Judd explained that he thought the movie was really funny and was shocked when he saw reviews that said there wasn’t a laugh in it. Judd did say though that he applied some of the lessons he learned from that to the movie he was making at the time, “Liar, Liar,” which was a lot more successful.

Judd said he got his start in comedy working at his high school radio station interviewing people like Jay Leno, John Candy and Howard Stern.

Judd said most of the people were good sports and gave him full interviews…except for Howard, who he called the biggest “dick” because he only spent five minutes with him. Howard then played portions of their interview, including; Howard telling a 15 year old Judd to be himself, Howard claiming that his show was going to get wilder, and that he recently got in trouble for burping on the air.

After about 5 minutes on the phone together, Howard says, “Ok I gotta go, bye.” After the clip, Howard joked that he had given Judd more time than he gave Gary’s party.

Howard read that Judd lived with Adam Sandler when he first moved out to LA, which Judd said was true. Judd talked about opening for people like Sandler and Jim Carrey, noting that it was very difficult to be on the same stage with such brilliant comedians.

Howard said it was a tribute to Judd’s intelligence that he recognized he wasn’t going to be a stand up comedian on the same level as them but was still able to parlay that into a successful TV and movie career.

Judd recalled sitting around listening to Adam Sandler make phony phone calls that were brilliant. Judd went from stand-up to writing for shows like “Rosanne.”

He recalled a couple of fight between Rosanne and Tom Arnold, one when they were filming at Judd’s grandmother’s house and another when Tom didn’t want Rosanne to have lunch with Jesse Jackson because he was afraid he’d hit on her.

Judd told how he also worked on the “Larry Sanders Show” when Howard was on it and recalled Howard talking about Gary and his “Butt Boy” on the air the next day – admitting he was the “Butt Boy.”

Howard said he saw a picture of Judd’s wife, Leslie Mann, who Judd has worked with on lots of projects, and pointed out how good looking she was.

Judd recalled scoring with a really hot chick once but was really embarrassed when he lasted only 5 seconds with her.

Howard sympathized with him, saying he was once with a woman and had that happen, so he told her to wait a few minutes for him to recharge and he’d last much longer, but only managed to double it to 10 seconds on the second go around. Before he left, Howard congratulated Judd for being a successful guy from Long Island with hits like “40 Year Old Virgin” and hoped his latest film, “Knocked Up” would be a success as well.