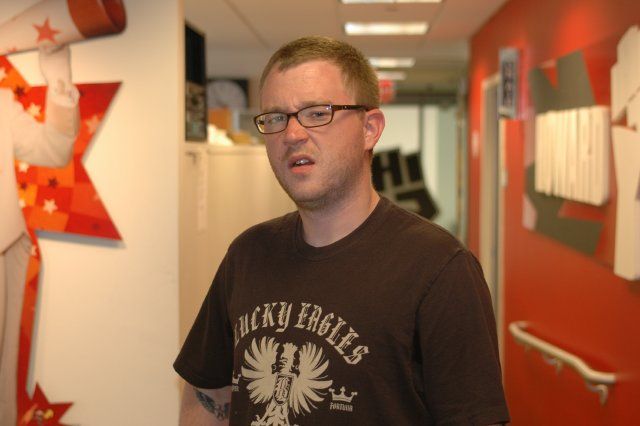 Howard brought up the confrontation Artie had with his assistant, Teddy, on the Wrap-Up Show yesterday. Artie defended his actions, saying, unbeknownst to Howard, he’d made Teddy is “official” assistant, so he had every right to be upset with Teddy’s inability to anticipate his needs…and wake him up in time to make the wedding he missed this past weekend. Howard thought Teddy’s position wasn’t “clear,” but Artie insisted Howard wouldn’t know. Howard told Artie that he had a bunch of assistants, but there were still things he had to do for himself. Teddy came in to say he never asked to be Artie’s assistant, Artie asked him. Artie again told the story of Teddy drinking too much during Artie’s New Year’s Eve gig, citing it as an example of their problems. Artie added that Teddy recently mixed up some gig dates and can’t even manage his own money very well.

Teddy admitted that he wasn’t the best money manager; he helps support his girlfriend, a student, and recently purchased a motorcycle for transportation. Teddy said it was difficult to talk to Artie on the phone, because he’s frequently abusive and has even had 3500 people chant “homo” at him. Howard and Robin speculated that Teddy might not be cut out for the job and asked him what he really wanted to do. Teddy replied, “I just wanna dance.” Artie reported that Teddy smoked weed when he took him to the Playboy Mansion last year, rendering him nearly useless as an assistant for the rest of the evening. After hearing the story, Howard decided that the position wasn’t really for Teddy. Artie said he was also irked when Teddy’s friend told one of Artie’s cousin’s friends that he went to Harvard – and then banged her. Despite his complaints, Artie assured Teddy that he was a good guy and definitely not fired.