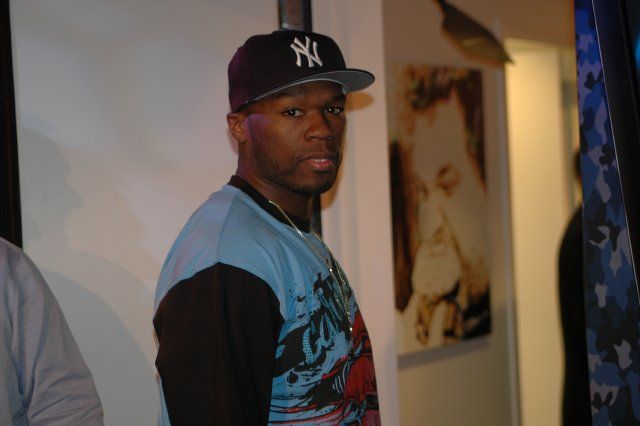 50 Cent stopped by to promote his new record and reported that he was also selling the Connecticut mansion he bought from Mike Tyson, as he doesn’t get to spend enough time there. Howard asked 50 if his friends ever tried to stay at the house after a party, and 50 admitted it sometimes happened. Robin wondered if there was a designated “blowjob area” in the house, so 50 explained that he would never limit oral sex to just one area of his home. Howard asked 50 if, like Kanye West, he was annoyed by the VMAs. 50 admitted he was miffed that MTV only showed “a minute and twenty seconds” of his performance. Howard told 50 he loved the video for “21 Questions” and said he would’ve tried to bang Megan Good, 50’s co-star in the video. 50 didn’t take the bait and refused comment. Howard speculated that 50’s “move” was to approach a chick about collaborating.

50 told the crew that Eminem still gets a share his profits through his next record, but they were “straight,” as he’d rather have the money go to Em than anyone else. Howard asked 50 if he was going to quit the music business – as he claimed he would – should Kanye West’s new album outsell his, so 50 confessed that the rivalry was just to promote records.

Howard wondered how much 50 has profited off the sale of Vitamin Water, but 50 explained that he couldn’t say as he had signed a non-disclosure agreement. However, he did admit he took a vacation after finding out the company was sold to Coca Cola for $4 Billion. 50 said he was dealing with “a lot of negative energy” now because of the massive success he’s achieved in four years. 50 noted that wanted to get back to doing “regular things,” and joked that he wished he could “shoot someone one more time,” so Howard told him to be careful. Howard asked 50 if he ever performed oral sex on women, and 50 answered he was “selective” but also a “pornstar.” 50 also claimed he sometimes focused on ESPN to keep from finishing too fast. A caller asked if 50 was at war with Cam’ron, so 50 said he hadn’t heard from Cam since he talked trash on Hot97. King of All Blacks then called in to say that 50 was “the man” because he wasn’t into all that “positive shit” like Kanye.

50 Cent told Howard about meeting Madonna, so Howard asked him how he felt about Madonna adopting a black baby. 50 felt “going to different places and picking up babies was weird.” Robin asked if 50 were offended by the practice, but 50 claimed no; he just didn’t understand it. So Robin suggested that 50 go to Switzerland to adopt a blonde white boy in contrast to the children adopted by Madonna and Angelina.