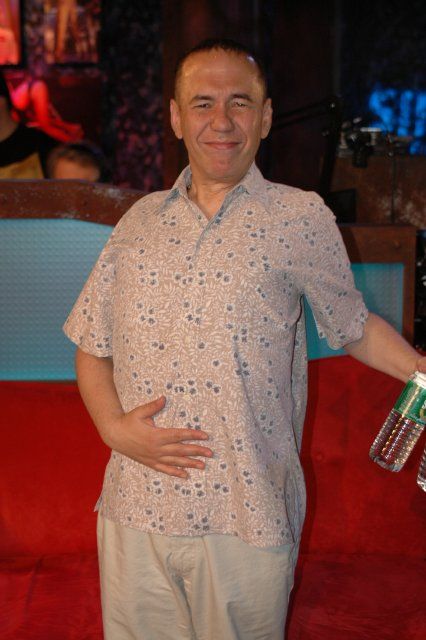 Gilbert Gottfried stopped by to promote his upcoming stand at Caroline’s.

Howard asked him about his routine at the Pat Cooper roast. Gilbert said he just told a few of his favorite jokes; like one about a limbless woman and another about a bank teller. Howard then asked Gilbert if he could respect any of the comics who won “Last Comic Standing,” so Gilbert remarked that there was nothing he loved more than watching someone else as they were failing.

Howard asked Gilbert about bombing at a corporate gig in North Carolina recently, and Gilbert explained that he was hired for a Christian event so he opened with crucifixion jokes. Gilbert laughed that someone had to physically pull him off the stage. Gary came in to say that Gilbert has a strange reflex: if you tell him what to do, he’ll violently stride in the opposite direction. At a recent “clean” gig, Gilbert reportedly said “cunt” six dozen times. Howard wondered if Gilbert had ever cleared a room, so Gilbert noted that the Improv used to put him on stage when they wanted to close early. When prompted, Gilbert did his Seinfeld impression, mentioned his distaste for Seinfeld’s recent appearance on Oprah, and told a joke comparing Oprah to a black leather couch. Artie and Gilbert then reminisced and shared stories about disastrous gigs where they’ve bombed on stage.