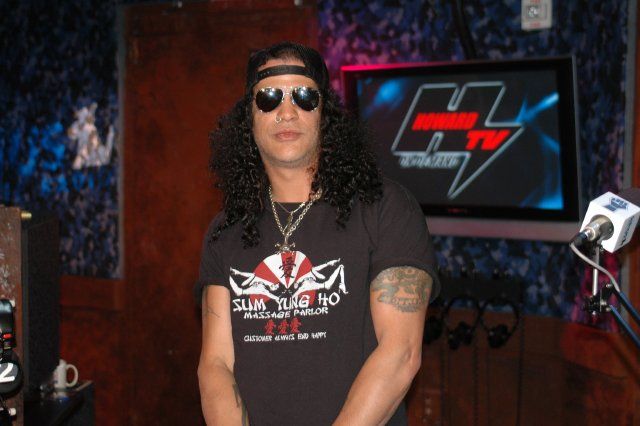 Guns N Roses legend Slash stopped by to promote his new book, “Slash,” so Howard asked him how long it took to become a “guitar virtuoso.”

Slash said he played twelve hours a day and originally planned to play bass, but he was converted by watching a music teacher play some Hendrix guitar licks.

Howard wondered if Slash really cheated on his current wife the night before his wedding and Slash laughed that the story wasn’t exactly true—he cheated on his first wife the night before their wedding. Slash told the crew that his mom once had an affair with David Bowie, so Howard speculated – since Slash’s mom, like Bowie’s current wife, is black – that Bowie must really be into black women. Robin Quivers told Howard he was being ridiculous: you can date two black women in your lifetime without being specifically “into” them. Slash then told the crew about doing drugs with another of his mom’s boyfriends when he was only 12.

Slash confessed (“in all fairness to Axl”) that he wasn’t fired from Guns N Roses – he left on his own after the rest of the band had quit. Howard asked Slash how he disciplines his kids, so Slash explained that he wasn’t “too big” a disciplinarian, adding that he’s got a pretty good handle on it, but “my wife usually handles that.” Slash admitted that he gets “a little antsy” when he’s home for too long.

Howard asked Slash if he’d ever used Subutex, and Slash revealed that he’d used it about a year ago to get over an Oxycontin addiction. Slash said “half the fun” of doing heroin was cooking and preparing for the shot, but he had to stop when he realized that it would never be as good as the first time he tried it. Robin asked Slash if he ever went to rehab, so Slash told the crew that he just recently completed his first rehab stint.

The Dangers of Group ‘Interaction’

Howard wondered if Slash had a hard time in rehab because of his fame, so Slash explained that he went to an expensive rehab where he just so happened to be the only patient. Slash then told the guys another wake-up story about Izzy Stradlin ejaculating on his leg after having sex with a girl they were double teaming. Slash added that he always felt “kind of” bad for even the most stupid groupies.

Slash said he used to throw parties at his house with lots of “interaction,” and at one of the parties, he was banging a chick and Ron Jeremy “came up behind her – without even asking – and I felt violated.” Howard asked Slash if he regretted including any stories in his book, so Slash said he still questioned whether or not he should’ve recounted the story about finding his friend James Hetfield “head-f’ing” a chick in a hotel room.