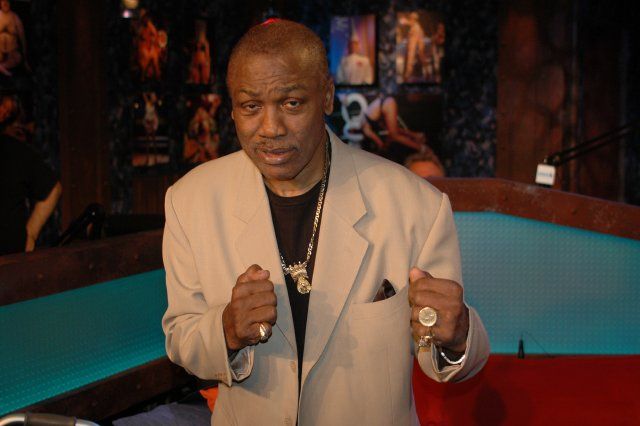 Joe Frazier stopped by to promote his burgeoning singing career, and everyone was surprised to see that he was using a walker. Joe slurred an explanation, so Howard asked Robin to interpret his answer for the crew: Joe was driving his Caddy a few years ago and it “got away from him” after the gas pedal stuck. To test Joe’s singing ability, Howard played a backing track for “Mustang Sally,” and Joe sang along. Howard asked Joe about his youth, so Joe laughed that his mom used to grow pot in their backyard. Joe said his mom would sell it for 20 cents a pound, but he never partook himself: “The only drugs I take my doctor gives me.” Joe also discussed his father’s infidelity, which revolved around his career as a bootlegger, and his mom’s propensity for beating her children naked – so as not to ruin their clothes.

Howard wondered if Joe was still angry with Muhammad Ali for calling him a “gorilla,” but Joe replied that he now pitied Ali’s condition. While he was on the subject, Joe said he appreciated old school boxing fights more than the MMA matches that are en vogue now: “They look like two women with all that kickin’ and scratchin’.” Howard then asked if Joe used Viagra, but Joe denied it: “I’m having a good time…don’t back down.” Under questioning, Joe explained that he was only suing his daughter for “some papers” that she has: “I turned it over to the lawyers, so let them worry about that.” Joe added that he hadn’t talked to his daughter “in many a year” but denied Howard’s attempts to call her and broker a reconciliation. Instead, Howard asked who Joe would be voting for in the Pennsylvania primary, but Joe refused to say.