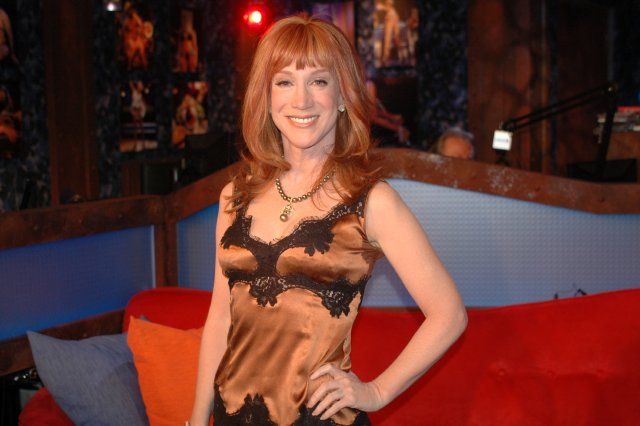 Kathy Griffin stopped by to promote the new season of “My Life on the D-List” and noted that she recently caught Robin mid-booty call. Kathy said she boarded an elevator at a midtown hotel and, to her surprise, the other passengers were Robin and Jim Florentine: “Robin was dressed to the nines. She had a cocktail dress on, heels…and then I saw she was with a guy who was shifting around.” Howard asked Kathy about her most recent “relationship,” Apple co-founder Steve Wozniak, and Kathy reported that she’d actually never slept with him: “It was really more of a friendship.” Howard told Kathy that he’d be afraid to bed her: “I feel like you’d laugh. You’d be analyzing me.” Kathy replied that she was a different beast in the sack: “When I’m in, I’m in. I get to work.” Howard wondered what Kathy’s claim to be a “barrel of monkeys” meant, so Kathy confessed that she’ll lick balls and role play – but, much to Sal’s dismay, piss-play was taking it too far. Kathy also said she could be convinced to do almost anything if there’s “lots and lots” of kissing first.

Kathy complained about getting booked for the Kathie Lee hour of “The Today Show” instead of the earlier primetime hours with Matt Lauer. Howard admitted that the slight was pretty crushing. Kathy listed all the other chat show’s she’s banned from, laughing that she’d even been “re-banned” (banned, allowed back, and then banned again) from “The View” for working a conversation she had with Barbara Walters in “The View” make-up room into her act (Barbara reportedly opened up about her lube preference: Astroglide).” Howard asked Kathy if she was open to swallowing, and Kathy admitted, “It’s on the table.” A caller wondered if Kathy had ever been with a black man, and she admitted she had. Howard wanted to know how dark the guy was, so Kathy cited Robin’s skin as a reasonable comparison. Kathy added that they had a good time together by simply “taking race off the table” and never discussing their skin color.