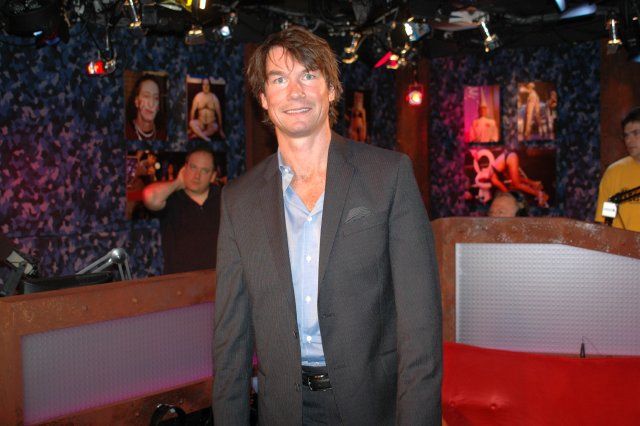 Jerry O’Connell stopped by to say he still suffers fan retribution for losing Celebrity Superfan Challenge: “I’ll be walking down the street and people will yell, ‘You suck, O’Connell!'”

Howard asked Jerry if he was having twins with Rebecca Romijn, and he confirmed it: “Two girls…or two boys with really small genitalia.”

Robin Quivers wondered if Jerry expected his children to be a little chubby when they’re younger like he was, but he didn’t think so.

Jerry revealed he gets to name one of the twins and Rebecca the other: “She’s going with Dolly, after Dolly Parton…I’m thinking Cher.”

Howard asked Jerry about Rebecca dictating his television watching habits, so Jerry went on the defensive: “If I were by myself, I would probably watch something else, but I don’t mind watching ‘Dancing with the Stars.'”

Howard tried investigating the reasons why Jerry and Rebecca won’t be attending his wedding, but Jerry couldn’t really say: “You’re putting me in an awkward position here.”

Rebecca Romijn Is a Knockout

Howard said Jerry should try pressuring Rebecca to let him attend the wedding, as she couldn’t be cruel enough to punch him out again – and then played a clip from the Wrap-Up Show in which Jerry discussed the incident, in which a drunk and hysterical Rebecca punched him out for golfing when he said he was elsewhere. Jerry explained: “I would [defend myself], but I’m afraid of getting punched again. I’m kidding! I’m kidding, honey. She’s listening in her car right now and punching the steering wheel.”

Howard asked Jerry about his sex life since Rebecca became pregnant, and Jerry replied that it had definitely slowed down in the first trimester. Howard wondered if Rebecca could at least jerk him off, but Jerry admitted that he’s tried unsuccessfully: “I inquired about that.”