Actor and comedian visits to promote "'Til Death" 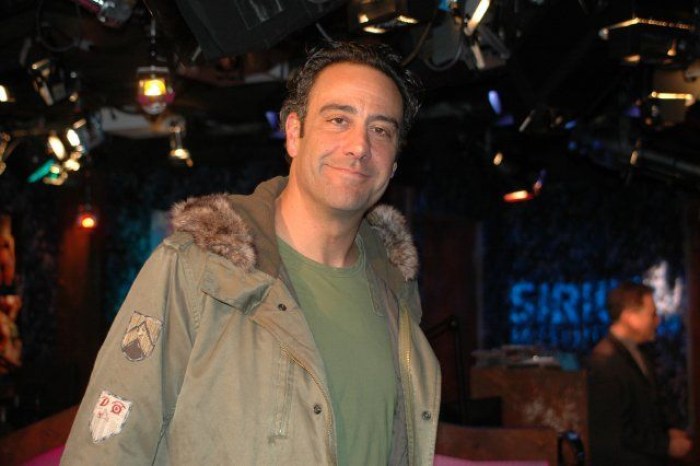 Brad Garrett stopped by to promote his show “‘Til Death” and told the crew that he wouldn’t be explaining the black eye he was sporting this morning. “I had an accident last night,” he said. “I won’t tell ya.”

Brad asked Howard how “well endowed” he must be to demand an 11-carat engagement ring, so Howard answered by quoting Brad’s comments on loneliness. Howard explained he and Beth enjoyed each other’s company, which was a rare thing after seven years together: “Beth and I clicked. I like being with her,” Howard said.

Brad admitted that he’d like to find a woman like Beth. “You’re the luckiest [guy] in the world,” he said,.

Howard asked Brad about his new dating show: “You’re not being honest. You were hoping you’d meet someone hot.”

Brad said Howard was probably right, but none of the girls that auditioned made the cut.

HowardTV brought up a picture of Brad’s girlfriend on the in-studio monitors, but Brad claimed they had that the wrong girl. “[That’s] a hooker,” he joked. “No, that’s someone I dated almost a year ago.” Brad laughed that the girl he was dating now was 5’3″, which, for a 6’7″ guy, is a big difference. After HowardTV finally found a picture of his actual girlfriend everyone agreed that she was hot.

As a parting shot, Brad expressed concern about Artie Lange’s drinking, saying he shouldn’t be afraid that sobriety will ruin his act or talent, which is sometimes a hard thing for alcoholics to hear. “When people used to tell me that, I wanted to put them through a wall … but you gotta be ready,” he said. Brad added that Artie can’t turn into a “just a beer, just a glass of wine” drinker – he has to go all the way.