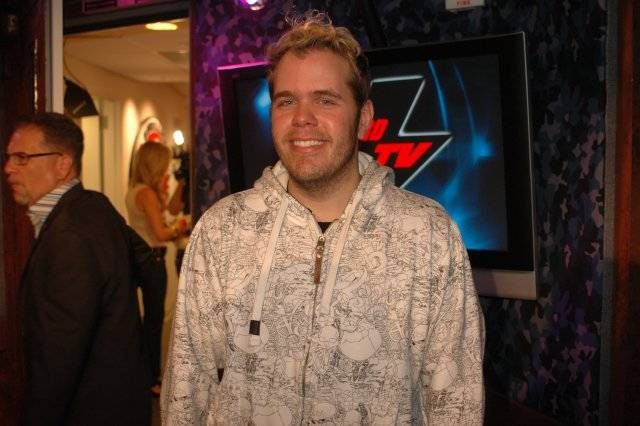 The owner of one of the most popular gossip Websites on the Internet, PerezHilton.com—who also happens to be named Perez Hilton—stopped by to say hi Tuesday morning. Howard noted that, other than his sister and mother, Perez pretty much runs the site himself. Perez explained he gets up at four in the morning and trolls the Internet for stories and photos to post (and draw on). Howard observed that one of the drawbacks of his success was that the things he used to get away with when no one was paying attention get him into trouble now that his site is so popular. Perez agreed, noting he now has to pay for the photos he uses on his site. Perez asked Howard if it was true he and Beth would be getting married in the next few days. Howard laughed that news outlets had been reporting the same thing almost every weekend this past summer, adding that Beth had been approached by a couple of magazines offering up to $2 million for photos from their wedding. Howard said they had considered taking the money to give to their charities, but in the end turned the offer down.

Perez Has the Dirt

Howard asked Perez about the story he’d read of a wild night on the town Perez had spent with John Mayer and Jessica Simpson. According to Perez’ version of the story the trio shared a very hot few minutes in a club, although John Mayer’s people denied the story. Howard asked what Perez has been hearing about politics in Hollywood and Perez reported that most everyone was pretty vocally supporting Obama – except Kid Rock who doesn’t think people shouldn’t talk about their politics in public. Perez thought the recent addition of Sarah Palin to the race was great from a gossip columnist’s point of view…adding that the most recent thing he’d heard about the Governor of Alaska was that she had a tanning bed installed in the governor’s mansion, although she claims she paid for it with her own money.