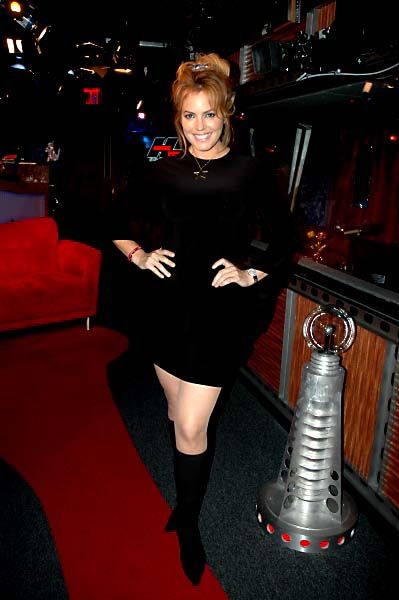 Sandi Taylor stopped by and confused the crew with an odd dress that had the sleeves attached to her hips (Robin recently wore the same dress on “The View”) and showed the crew that it didn’t limit her arm movement. Howard explained that Sandi’s been a friend of the show for a long time – she first came in 16 years ago with Sam Kinison when she was dating Sam’s bodyguard. Sandi then briefly recapped her career, the highlight of which was being the first girl to pose for both Penthouse and Playboy. Howard noted that Sandi was actually featured in the original “Are You Smarter Than A Fifth Grader?” bit that some other TV show ripped off – with Kenneth Keith Kallenbach and an 8-year-old – and has since starred in 20 films. Sandi then told the crew about signing autographs at signing conventions, laughing that the most popular people (Linda Hamilton, Leslie Nielsen) were really generous with the fans, and how rude the worst of them are: “I don’t think Kate Jackson [from “Charlie’s Angels”] should ever do another convention.”

John Reveals Where His Salary Is Really Going