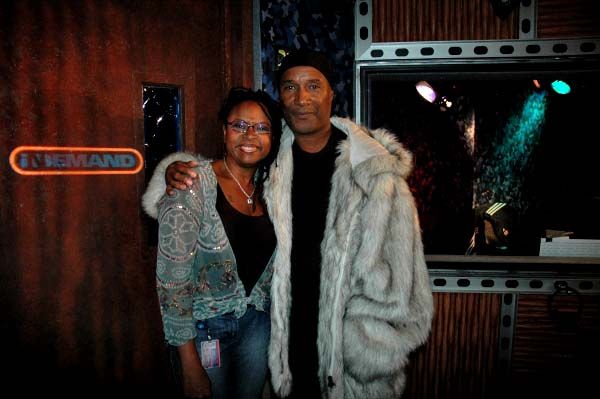 Paul Mooney stopped to say hi and showed off his new coat which Howard thought looked like it came from a wolf: “It’s paid for…it’s not real [fur], but it could be.” Howard asked Paul if Obama winning the election was Martin Luther King’s dream, and Paul said yes: “I think it’s great. America will truly be America.” Paul added that Obama wasn’t going to solve all his problems: “The girl I was dating had a baby. And it wasn’t my baby. So we broke up.” Howard asked Paul if, like Lawrence Taylor, he was a big fan of strippers, and Paul said he was more than a fan: his third wife was a stripper. Paul complained, “They’re obsessed with their body. That’s their thing…It’s what they live for.” Paul said they were also great in bed, “Like the hooker, they understand the fantasy.” Howard wondered how the marriage could’ve gone wrong, so Paul laughed: “She got religious.”

Paul Mooney referenced the time he told the show that Barbara Walters had slept with Richard Pryor, saying her latest book (in which she confessed to an affair with another black man, former US Senator Edward Brooke) proved her preference for “brothers.”

Paul (as “Negrodamus”) also predicted that Robin will be married by next year at this time, but Howard doubted it, as Robin has always claimed she’ll never marry. Robin laughed that her opinion had changed: “I’m not gonna lie…I thought I would be with Mr. X for the rest of my life…I’ve been single a long time. It’s time to try something else.” Howard asked if Robin would also now consider adopting a child, and Robin said she would: “I’d consider anything.”