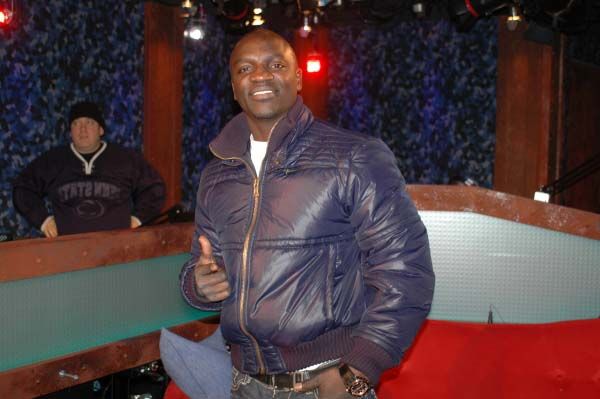 Rap star, Akon stopped by to promote his new album, “Freedom,” and asked Robin, “Why they got you in a fishtank, Momma?” Howard questioned Akon about his parents’ marriage, and Akon confirmed the rumors: his father (at the age of 12) chose his mother to be his wife when she was only 2-years-old – and then helped raise her until she was 16, when he married her: “He made sure no one messed with her in school and then he married her…they lived in the same neighborhood all their lives.” Of course all of this happened in the West African country of Senegal where they lived at the time. Akon said his father now had three wives: “In Senegal, you can have as many as you can afford.” Akon laughed that he had four “wifeys” himself. Howard wondered how Akon’s wife felt about his “wifeys,” so Akon explained: “I’m not supposed to do it, I just do it anyway.” Akon said he even wrote his most recent single, “Right Now (Na Na Na),” about one his girls. Fred then played the intro to one of Akon’s biggest songs, “I Wanna F’ You,” and Akon laughed that the clean version is titled “I Wanna Love You.” Howard didn’t like the edit: “I like ‘I Wanna F’ You’ better.”

Will Akon Be A Con Again?

Howard asked how long Akon was in prison, so Akon said that, in total over the years, he’s done 3 years in jai;. A caller asked about the YouTube video of Akon throwing an audience member into the crowd, but Akon refused to comment: “I go to court on that next week, actually…I think the charge is assault.” Howard said he saw the same video which shows the guy throwing something like a bottle at Akon before being pushed off the stage, which Howard felt justified the reaction.