Mr. Ashlee Simpson in the House

Mr. Ashlee Simpson in the House 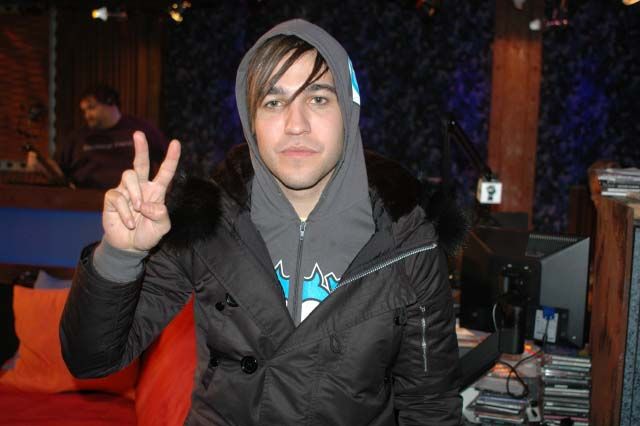 Fall Out Boy’s Pete Wentz stopped by to promote the band’s new album and the bassist was quick to address his issues with paparazzi intruding on his relationship with wife Ashlee Simpson. “It becomes dangerous and annoying,” he revealed. “We’ll [go] an hour out of the way [and use] a diversion tactic to avoid them.”

When Howard asked if Pete became a tabloid target before or after marrying Ashlee, Pete laughed when he said it was definitely all about Ashlee. “I’m kind of like a purse for my wife,” the rocker joked.

Pete—who was sent away to a boot camp reform school by his parents—admitted to the crew that he had been a pretty wild kid with antics including he take a lot of hallucinogens and once getting drugged up on Ambien and playing Russian roulette. “You’re on Ambien so it’s like a cartoon,” he said. “It’s like the minute before you bungee jump or get on a plane.” Howard didn’t think getting on planes was so hard, but Pete explained he struggled with anxiety so severely that he couldn’t travel on planes for years after Fall Out Boy first broke.

Howard asked Pete what it was like to date Michelle Trachtenberg, but Pete would only say, “She’s a nice girl,” adding that Michelle dumped him during his hard-partying days. Howard noted that Pete also dated Lindsay Lohan, and Pete confessed that “I don’t feel like we ever dated…I was so deep in Ambien-land, I don’t think any of that connection ever happened.”

Howard asked how Pete and Ashlee got together, so Pete said he did an interview with Rolling Stone and admitted he had a crush on her. Later, he met her at a party and though they were fast friends, they were with other people at the time. Pete laughed as he recalled what Ashlee’s dad, Joe Simpson, told him the first time they met. “‘Pete, we saw a little too much of you on the Internet last year,’” he remembered the elder Simpson saying.

She Likes Her Husband To Have Fun

Pete also admitted that Ashlee was really curious about the times he used to pleasure himself to her pictures. “She loves it. She was like, ‘What were you thinking about?’…I mean, I’ll probably get in trouble for this,” he said before opening up about the first time they got together. “It was the single greatest sexual experience of my life. We were in the Soho Grand. There was a mirror there and I was looking in it and said to myself: ‘You’re banging the girl of your dreams and watching it right now.'”

When a caller pressed Pete for more details on the couple’s intimacy, the bassist simply smiled. “My wife likes me to have some fun,” he noted.