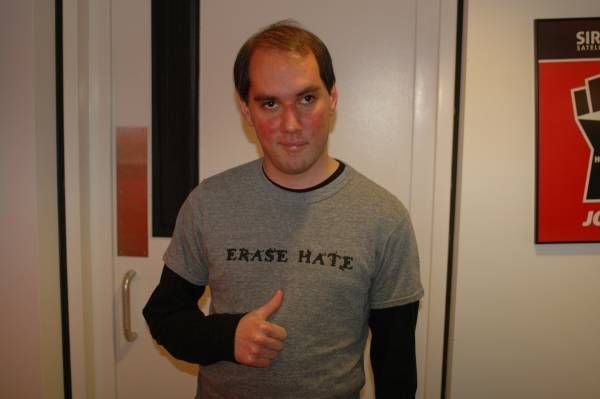 Howard wondered how High Pitch Mike was doing now that he’s living out of the closet: “Where is that little queen? And who’s he attracted to?”

Gary reported that Mike doesn’t get in until 10am and, according to Brad Driver (Howard100 news director/Mike’s boss), “definitely hasn’t gotten laid yet.” Later, Mike came in and Howard told him his skin had cleared up now that he’s out.

Mike said he’s going out on a date this weekend with a “kid” who’s “college age.” Everyone “whoa”d, so Mike explained that he met the “kid” at a party, adding that he’d like to tell them about his sexual history, but he wanted to wait until Artie was in-studio. Howard asked if Mike would at least talk about blowing dudes, but Mike resisted: “Who says I blow dudes? Who’s to say I’m not getting blown?”

Mike noted that he could count the number of dudes he’s been with on one hand, and he’s a top: “I don’t get f’ed.” Howard wondered if Mike was open to being a bottom, and Mike admitted if he was – if he was in a committed relationship. Richard then came in to ask Mike to demonstrate his oral sex technique on a banana, but Mike refused.