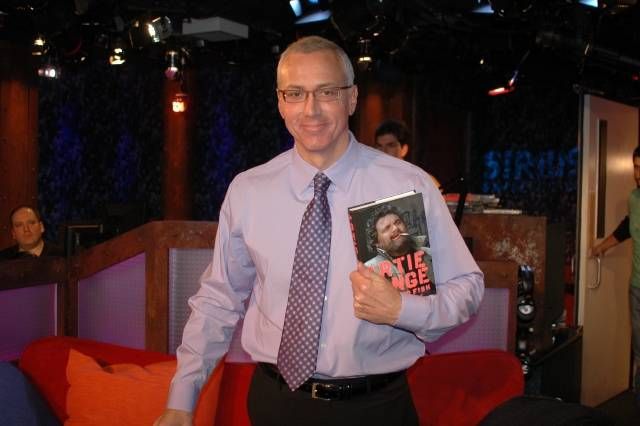 Dr. Drew stopped by to promote the upcoming season of “Celebrity Rehab: Sober House,” and Howard asked him if he felt like he was taking advantage of sick people by putting them on TV.

Drew admitted it had the potential to exploitative, but the trade-off was threefold: 1. The celebrities do get good treatment; 2. The cameras and publicity motivate them to stay strong; 3. The show helps them serve as an example to others struggling with addiction.

Artie asked if Drew would have Jeff Conaway back for a third season/try, but Drew refused: “No. I’m done.” Artie told Drew about the “wellness center” where he kicked drugs over the Christmas break and asked if it sounded legit to him.

Drew was honest: “In my experience with opiates, there are four outcomes: death, recovery, using or replacement…it seems to me [after reading your book] that you want to join your dad…you deserve a better life.”

Howard wondered how the show should go about testing Artie for drugs, and Drew recommended that they be sure not to give him the opportunity to cheat – for a urine test, someone should watch to make sure it’s really Artie’s “penis in the cup.” Artie objected, but Gary assured him he would be quite close: “Artie, I love you, but I don’t think you’re above buying urine.”

Artie said he wouldn’t do it if Gary had to see “penis in the cup”: “I don’t have the Whizzinator…I don’t know one person who doesn’t do drugs or drink! Who am I gonna pay [for urine]?”

The crew thought Artie might be more agreeable if Lisa G were the one to watch Artie put his penis in the cup, but Artie didn’t think so: “If my penis is out in a room with Lisa G, it’s going in her mouth.”

Howard then asked Drew about Robin’s addiction to colonics, and while Drew had his reservations, he admitted, “It seems to be working for her.”