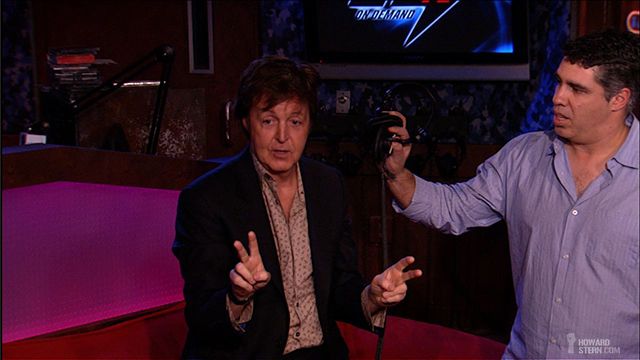 Sir Paul McCartney stopped by to promote his latest project, “Electric Arguments,” and presented Howard with a signed Hofner bass, just like the one he plays. Howard was blown away and thanked him—and promptly started in with the questions, asking if the record’s darker tone “could be” due to his recent divorce.

Howard asked Paul how he liked single life, so Paul complained it was getting pretty bad— all he has to do is greet a woman in public (like Christie Brinkley or Renee Zellweger) and the media immediately reports that he’s dating them. Robin wondered if Paul had, as rumored, dated Rosanna Arquette, but Paul would only say that, “there were some ladies during that summer that I dated.”

Was John Hot For Paul?

Howard asked what Paul thought about the rumors that John Lennon might have been in love with him, and Paul went off. “We spent many drunken nights together and nothing like that ever [came out],” he remarked. “You can make up theories about anything, and particularly with the Beatles, that’s what happens.”

Robin then threw her hat into the ring, saying she’d like to fill John’s shoes. “You need someone to be with,” she pitched. “I think we’d be very happy together. I’m low-maintenance.” Paul, however, turned her down.

Reminded of Ringo’s recent “no more signatures” video, Paul said, “You’ve got to love Ringo,” he marveled. “The truth is, Ringo was always like that. Fans would come to his door and he would say ‘piss off.'” Howard wondered how Ringo ever joined the band, so Paul explained. “We were just a fan of Ringo’s drumming…one night Pete [Best] was ill, and Ringo sat in and we were like, ‘Oh,'” he remembered.