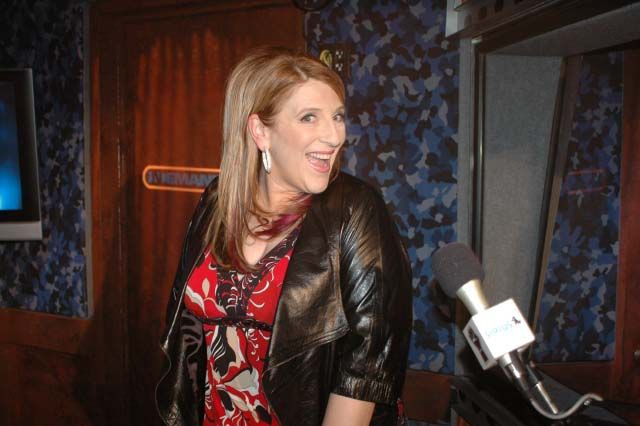 Lisa Lampanelli stopped by to promote her new HBO special, “Long Live the Queen,” and sarcastically said she was jealous that Sal once called a black audience member “King Kong,” because: “If I were funny, I’d have thought of that.” Howard asked about an invite Lisa sent him last week, so Lisa explained it was a viewing party for her special at the Friar’s Club: “It’s a thing where you go, wow, I have to invite people.”

Lisa told the crew that HBO tried to censor her special over two jokes: one that featured “American Idol” runner-up David Archuletta and another in which she tells Sarah Palin to stop having children: “A retarded kid is the warning shot of the reproductive system.” Lisa laughed that she changed the Archuletta joke to Andy Dick because Archuletta is under 18 – but the Palin joke stayed: “I’m the executive producer.”

Howard asked how Lisa felt about co-hosting Lisa G’s cookie party, so Lisa laughed: “Lisa [G] really knows how to party like it’s 1949.” Lisa added that when she and Lisa G go out to dinner together, she has too pull teeth to get Lisa G’s share of the tip: “I’m famous, Lisa, I have to leave 25 percent!” Lisa added that she was now dating again, but she refuses to date Asian dudes: “I like men like I like my coffee, not my urine.”