Rocker stops by with his friend Chip Z'Nuff 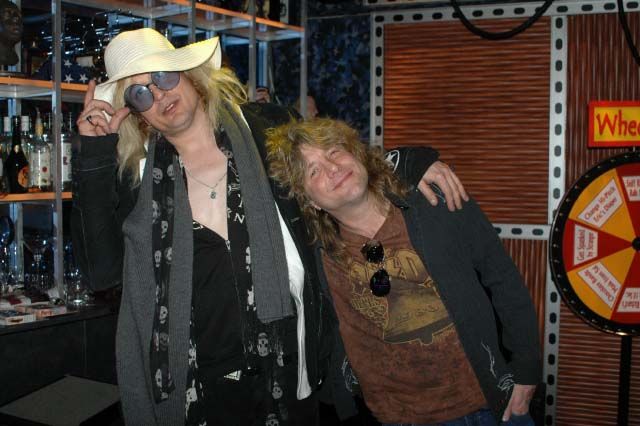 Steven Adler and his friend Chip Z’nuff stopped by to discuss the current season of VH1’s “Sober House.” Adler told the crew he was off heroin and was doing great. Howard asked if it was hard to be kicked out of Guns N’ Roses, so Steven said Axl Rose was wrong: “And Slash was wrong for not sticking up for me.”

Steven bragged that he later sued the band after being kicked out – and lost most of the money to his addictions.

Howard mentioned how Dr. Drew has accused Steven of making up a lot of the stories about his rough childhood, but Steven dismissed Drew’s claims, instead telling the crew about seeing Amber Smith’s vagina on set: “Her little pussy was all shaven.”

Howard asked Steven about his groupie-banging days with Guns N’ Roses, which caused Steven to laugh about how he used to watch TV and have groupies blow him – when he wasn’t even hard.

Steven claimed the groupies were all behind him now: “The back of the bus is me and Tim…not like the old days.”

Chip agreed and even brought his girlfriend, Susan, into the studio to show everyone why he wasn’t into groupies anymore. Steven told the crew about the speedball trip that triggered his stroke: “I was smashing my face on the bathroom floor … I couldn’t stop my face from hitting the floor … I got the towel under my face finally and it just wore off,” he recalled. “Then, of course, like an asshole, I went and did it again … I didn’t know I’d had a stroke. It was ten minutes later.”