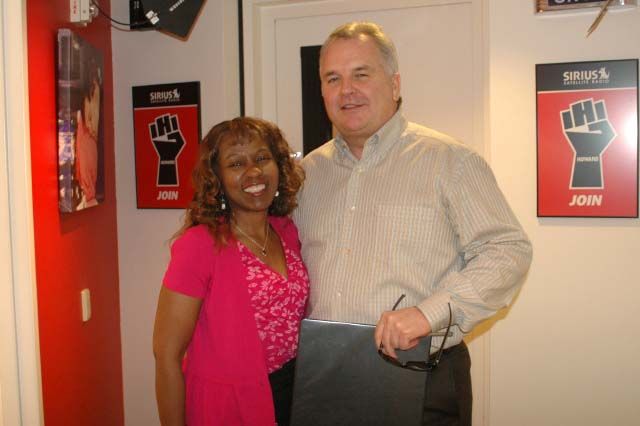 Howard asked Robin how Tim Sabean did while staying at her house for a weekend of fasting, “souping” and colonics – so Robin replied that she and Tim “just hung out,” sharing meals, going for walks on the beach, getting coffee enemas and ordering massages.

Tim came in to report that he’d lost 12 pounds in just 7 days, but Howard thought Tim would gain it all back: “And then some.” Dr. Roni came in to say she was proud of Tim, but Howard cut straight to it, asking if she caught a glimpse of Tim’s balls while administering his first coffee enema. Roni claimed she hadn’t: “I wasn’t even thinking about his body.” Howard doubted Roni’s account: “You have needs, Roni.” Tim explained that he prepared for Roni coffee administration by laying on his side, and then: “I pulled it all forward.”

Gary reported that Roni was also a hypnotherapist, which freaked Howard out: “Am I in a trance right now?” Roni changed the subject, saying Tim held his water for 10 minutes. Howard loved the news: “Ooh that’s as long as Robin! Good hold, Tim!” Tim laughed: “I got a big tank!”

Roni also reported that she inserted about 6 inches of the enema tube into Tim’s ass, leading to a round of the usual jokes. Tim tried to play it down: “It’s a small little tube.” However, Howard pointed out that 6 inches was also the size of the average penis.