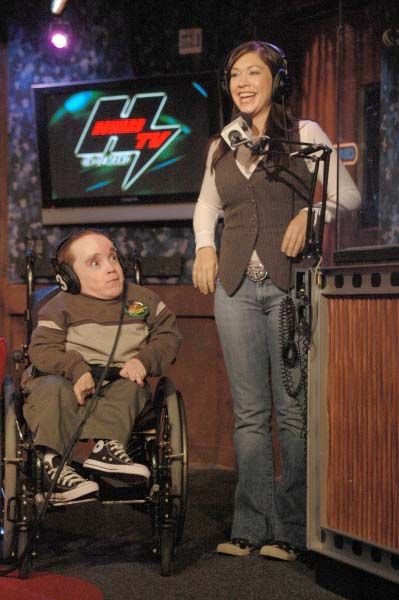 Eric the Midget called in to defend himself against a caller’s charge that he stalked Diana DeGarmo over the phone: “For starters, shitbreath, it wasn’t Diana DeGarmo’s phone number. It was Katherine McPhee’s.” A caller asked Eric how many cocks he could fit in his mouth, so Eric shot back: ” you f’ing loser. Maybe you fit as many as you want in yours…go find the nearest bridge or tallest building and leap off of it, f’er.” The crew mockingly “oh”d the lame barbs Eric traded with the caller until Howard called it Eric: “I like it when Eric said, ‘Of course not.'”

Howard asked Eric why there was a picture of his penis floating around the Internet as listener had email it to him yesterday, but Eric questioned the photo’s validity: “I don’t think so.” Howard thought it had to be Eric, citing the clubbed foot next to the penis in frame: “You think he’s hard there? I think he’s chubbed.” After sending the photo to Eric, he confessed: “Yeah, I think that-I think that is a shot. I sent it to a female…she was supposed to send me photos of herself topless.” Howard then described the photo: “The head is very small but you got a lot of girth. Eric, be honest, are you chubbed up in that picture?” Eric admitted he was.