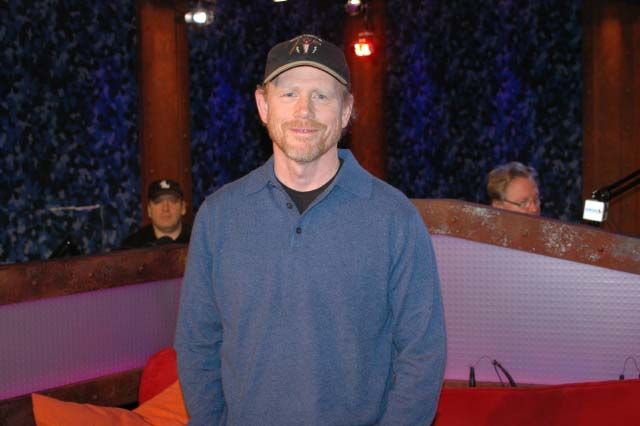 Ron Howard stopped by to promote “Angels & Demons,” the sequel to his successful 2006 flick “The Da Vinci Code.” Howard tried to put his finger on Ron’s take of that film’s reported $760 million gross, but Ron evaded his efforts, saying “everything goes into a pot,” referring to his production company Imagine Entertainment, which he runs with partner and fellow Hollywood producer Brian Grazer.

Howard and Robin wondered why Ron had avoided making a superhero film throughout his career, so Ron (after admitting to turning down the chance to direct the Batman, Spiderman, and Harry Potter films) claimed he couldn’t be cynical about the movies or manufacture them.

“You have to believe in what you’re doing,” Ron said.

Howard then showed the video of Gary’s pitch to Ron and asked for his opinion. Ron quickly responded that Gary threw like a girl.

Howard wondered (in jest) which movie Ron would rather see bomb: “Angels & Demons” or “Terminator: Salvation,” which stars his daughter, Bryce Dallas Howard.

His answer: “Well, I have a profit participation and she doesn’t. So when you look at the scheme of things…”

Howard also wanted to know if he was comfortable with Bryce doing nude scenes, so Ron laughed he’d had to deal with it ever since her college days, when she appeared nude in an avant-garde stage production.