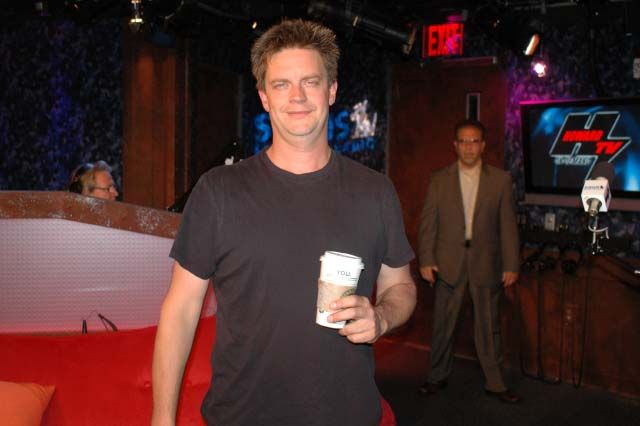 Jim Breuer stopped by to promote his upcoming Comedy Central show and his show on Sirius XM’s own Raw Dog Comedy channel. Jim thanked Howard – after his last appearance on the show, he booked a voiceover gig in Kevin Smith’s new talking-animal film, “Zookeeper:” “The agencies–honestly–they all listen to your show.”

Howard said he’d heard that Jim met with Judd Apatow, but Jim balked at discussing it further: “We’ll just see what happens on the horizon.”

But His Wife Is Looking to God

Jim said his wife recently found God: “I don’t know if she’s less fun, but it’s almost like – well, I’m a metal guy. And my music had to come to an end in the car … it’s ‘bad messages.'”

Jim laughed that they now have to listen to a Christian music station: “It’s like a million Michael Boltons trying to make it.”

Howard wondered if the couples’ sex life had changed, but Jim said no: “That’s a whole different beast. That world is still wonderful.”

Jim said his wife went to one of those weird seminars at the Forum with a friend and endured some “cult weird shit,” adding “when they came back they looked like aliens. Their eyes! They’d been brainwashed for three days.”

Gary told the crew about the time Robin returned from a Forum seminar and called him with an ambiguous apology, leading Robin to explain: “I thought about my relationship with Gary while I was there. I thought I had been terrible to him.”

Jim laughed that the worst part was that his wife’s conversion was her new commitment to saying grace at every meal — even in public. When the couple went on a double date with AC/DC lead singer Brian Johnson and his wife, Jim had to talk loudly to distract Brian from his wife praying/muttering to herself. Jim succeeded well enough to secure an invite from Brian to bring the Breuer family (including, in Brian’s words, their “f’ing c–t kids”) to his estates in France and Florida. Unfortunately, Jim’s wife refused to take Brian up on the offer, as she’s afraid of exposing her children to Brian’s language.