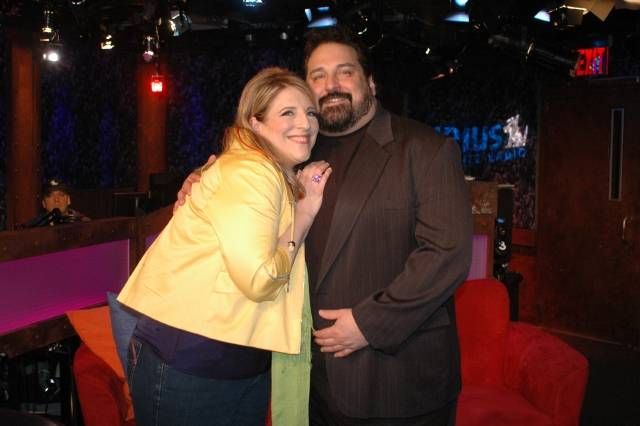 Lisa Lampanelli stopped by to promote her new book, “Chocolate Please,” and told the crew she was now engaged to Jimmy Big Balls – they’re getting married next October. Howard asked if the couple planned to have babies, but Lisa quickly answered: “No. No babies. Hell no.” Lisa said she did want to get a pet: “I wanna get a chihuahua and make him walk it down 5th avenue like a f*g.”

Lisa told the crew she recently offended George Takei by using the “J-word” in a thank you video she posted for him on her website – which surprised her, as he’s fine with being called a f*g.

Howard asked Lisa about Joan Rivers, who’s called Lisa “perfectly fine if you like black man jokes.” Lisa replied that she was a fan of Joan’s and also addressed rumors about her no-show at Joan’s roast, saying she didn’t appear at Joan’s roast because she wasn’t asked to MC it.

Lisa complained that she never got to shoot the Jim Carrey-produced HBO pilot she’d mentioned during her last appearance on the show: “[They] shit the bed. We didn’t even get to film the pilot…all they said is ‘We decided to pass.'” HBO still had to pay for the series’ development and Lisa plans to use the money to pay for her wedding.

Lisa then told a story about her attempt to “squeeze one off” in the bathroom at her first “food rehab”: “At the time I was thinking of this hot black fireman in Minneapolis.” She also reported that her fiancé had lost a lot of weight as well, adding that she knew this because she can now see his face when she goes down on him.