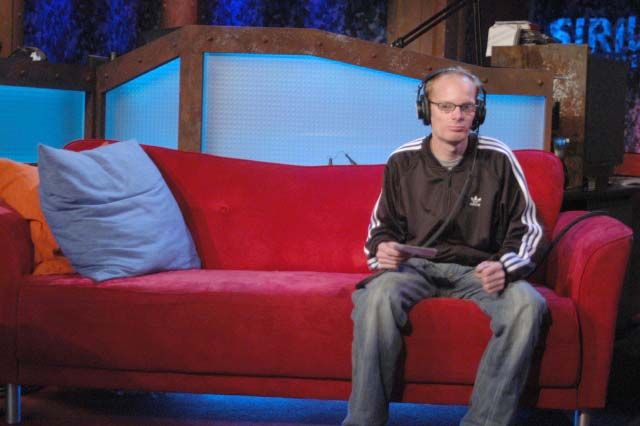 Howard got Dina, another listener who wanted to date Medicated Pete, on the line and told her Pete was starting to seem more relaxed on the air and around the office. Pete came in to say he had a new attitude: “You’re correct…I’m getting more confident.” Artie checked him: “If you’re not careful, you’re gonna become an asshole.”

Howard asked Dina why she was in a wheelchair, so she explained that she had Friedreich’s ataxia, a neurological condition that affects her balance. Dina added that she’d last gotten laid “earlier this year” and was actually quite athletic – despite not being able to use her legs: “I row. I rock climb.” Pete said he’d love to meet Dina but refused another suggestion – that he not take his meds for a day: “I spaz out completely – completely off the charts.”

And Another with a Felony Conviction

Howard also took another call from a woman who wanted to date Pete and learned she had a felony conviction. She said she’d recently done 8 months in jail for Grand Larceny: “I took some money from my former employer.”

She explained that she’d worked as an office manager for an engineering firm and – due in part to a gambling problem – “borrowed” about $8,000: “I actually planned on paying it back slowly but I was caught before that happened.” She claimed she hadn’t gotten laid since her release from Rikers: “I wanna date Pete so bad, Howard! He seems honest, adorable and cute.” Robin laughed: “Funny that you’re into honesty.” Howard pressed further, asking how Pete could be sure she wouldn’t scam him, so she replied: “8 months on Rikers Island rehabilitates you.”