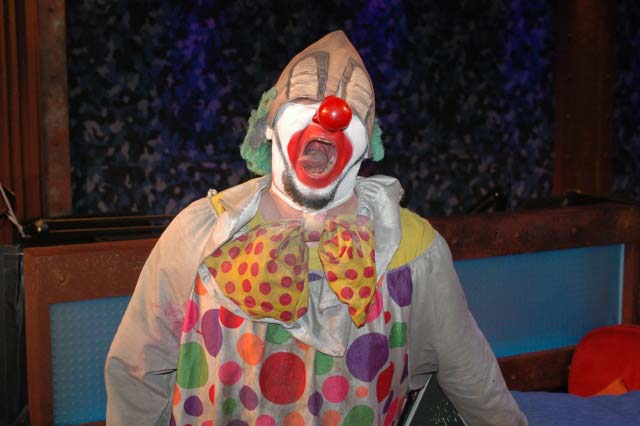 Yucko the Clown stopped by and almost immediately began trading barbs with the staff. Jason was the first to strike, telling Yucko: “Don’t worry about it. Your ex-girlfriend still texts me.”

Yucko later hit Gary hard, referring to Gary’s late brother: “The maggots have AIDS now.” Yucko said he also had a problem with Lisa G’s cookies-for-charity: “I just hate the concept of her coming in here and selling the bullshit and keeping half the money and only giving half to titty cancer or whatever.”

Yucko complained that Gary had annoyed him in the greenroom with a long soliloquy about why he couldn’t book another comic on the show: “Shove a cupcake in your big f’ing mouth!” Gary laughed: “Yucko should read between the lines of that conversation…you have to bring something to the show.” Yucko shrugged it off, telling Howard he recently bounced back from his divorce with some strange: “I got some stink on my dick a little bit…some waitresses and shit like that. That’s what the ex was–a cocktail waitress. I found out you’re just supposed to f’ ’em, not marry ’em.”