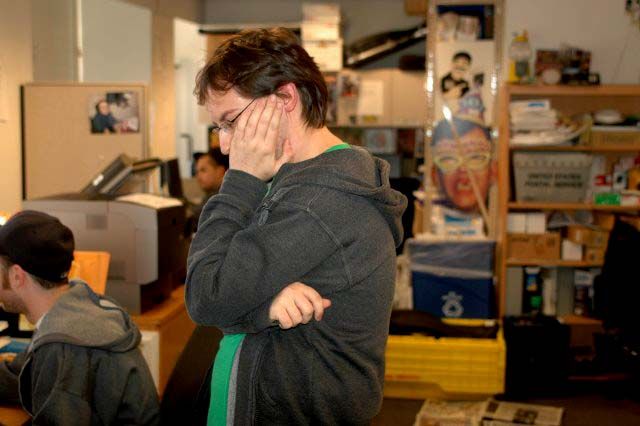 Howard noted that JD had turned up so he invited him into the studio for an update. JD said he had to leave soon for his doctor’s appointment but told Howard that he had not gotten any sleep the night before and was having “stomach issues,” although he did take a dump this morning that helped.

He said he did take the Zoloft that the clinic doctor had given him, but wasn’t sure if it was working or not. Howard was surprised by JD’s condition as he thought he was the last one around there to snap. JD acknowledged this, and added that he didn’t think he was having a breakdown, he was just having a hard time “sleeping and stuff.”

Howard told JD that he shouldn’t worry about not sleeping, explaining that he would eventually fall asleep. Howard instructed JD to just lie in his bed and close his eyes and, even if he doesn’t sleep, he’d get some rest and then, after a couple of days he would eventually fall asleep. Robin noted that she suffered from insomnia for a while and was never able to sleep using Howard’s method.

Howard asked if JD had tried jerking off and JD said he had not – so Howard added that to his prescription, to “get that stuff out of your system.” Howard added that JD’s fast-food prone diet was also probably something that needed to change as that kind of food was not good for health.

Howard reminded JD that he loved him and advised him to come in tomorrow to work out a more comfortable work schedule to lessen his stress. JD announced that he had to leave so he wouldn’t be late for his doctor’s appointment and Howard offered to go with him if he thought that would help. JD declined the offer.