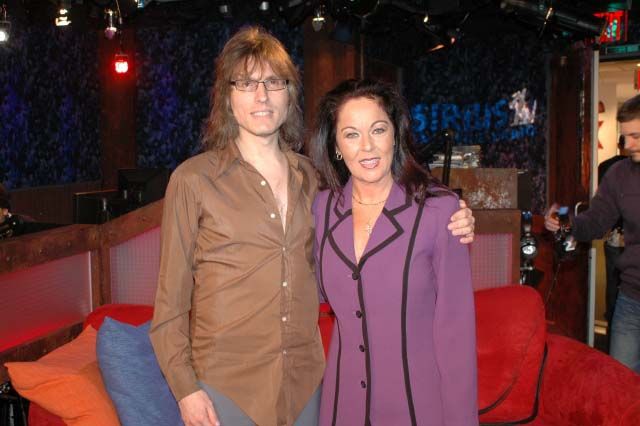 John the Stutterer stopped by with his escort “girlfriend” Natasha, but Howard thought Natasha was too conservative looking to be an escort: “I was excited that you’re having sex – I really am – but I was disappointed that you’re paying for it.”

Natasha said she provided John with ‘the girlfriend experience’: “There’s companionship. You go out to dinner. You go out to Atlantic City…Instead of calling them clients, I call them friends.” Howard asked if John was Natasha’s most messed-up client, but Natasha said he wasn’t: “As far as communication, I have people that are deaf – people that can’t hear me – people who are blind…a dwarf.” Howard wondered if she had a charitable streak, and she shrugged: “I do have a compassionate side.”

Robin had a different reaction: “I’m gonna throw up.” A caller wondered if John was afraid of catching diseases, but he claimed spicy foods kept him STD-free: “Hot peppers kill everything!” John added that he only got to see Natasha every once in a while, as he has to wait for his government-issue SSDI check to come in: “Now I don’t use that money for survival because now I liv-v-ve with my parents again.”

Natasha told the crew that she planned to stimulate John with a sex toy later as she jerked him off – and John cut in to say he hadn’t jerked off in a week to prepare: “So I have a massive load for her.”