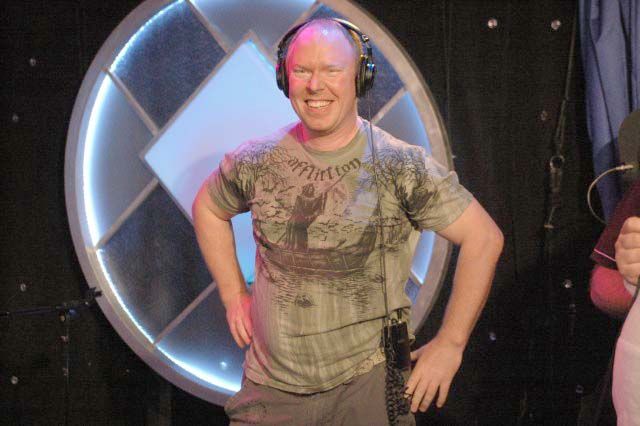 Howard complained that heard about Richard Christy’s engagement on Facebook, so Richard came in to say he couldn’t help it – his fiancée had rushed to the computer after his proposal: “That was the first thing she did was post it on Facebook.”

Howard asked if Richard showered for the proposal, and Richard laughed: “I might have bathed anyway, it had been a few days.” Richard told the crew that he’d proposed on their anniversary: “It was our fourth anniversary of the day we met. We actually met on the last day of KROCK.”

Richard popped the question in their favorite restaurant: “I just told her to close her eyes and put the box in her hands…she started freaking out…they brought over a bottle of champagne and we did a tequila shot.”

Welcome Kristie Christy to the Family

Howard wasn’t surprised to learn that Richard had celebrated with alcohol. Richard laughed (“Oh we had a few.”) and later clarified that he had 3 glasses of champagne, 3 ‘manmosas’ (super-sized mimosas served in a pint glass) and a shot of tequila. Howard asked if Richard’s fiancé would be taking his last name, making her ‘Kristie Christy,’ and Richard confirmed it: “Her actual name is Kristin.”