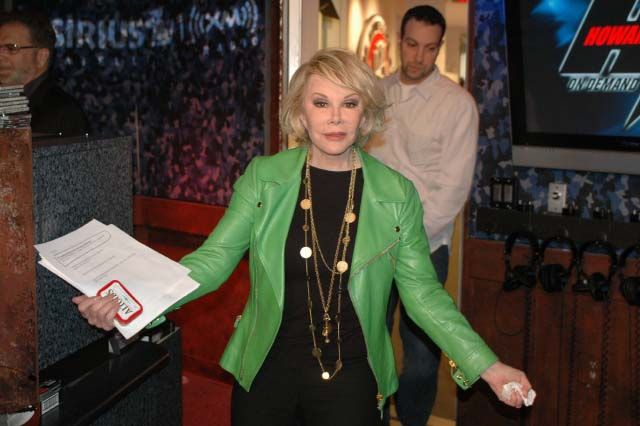 Joan Rivers stopped by to promote her return to E! with her ‘Fashion Police Oscar Special,’ and told Howard to excuse her appearance: “I used to weigh 107 and I was so happy. Now I weigh 116 and I want to kill myself…I never had a stomach in my life and now I have this big stupid stomach.”

Howard asked if she had a guy, so Joan clarified: “It’s worse. It’s higher up. It’s like those women who look like pigeons…I think I’m pregnant. Howard, ask me why.”

Howard obliged, setting Joan up: “I haven’t had my period since 2004.”

Joan then held court on young Hollywood’s obsession with plastic surgery, saying she was fine with it, but thinks it should be kept under wraps: “I thought [Heidi Pratt] was stupid to talk about it.”

Joan went on: “Look at Goldie Hawn. You don’t recognize her from [her] first movie.”

Howard cited Jennifer Aniston as someone who seemed to have had some work done, and Joan agreed, wondering if psychology had anything do with it: “She’s so unhappy.”

Joan told Howard she had a date die during dinner 7 months ago, joking that she didn’t notice at first: “It was horrible. He just got very quiet…his eyes were open.”

Joan laughed that he must have enjoyed his final moments: “Knowing me I was in the middle of a good story.”

Joan says she told a waiter and they called the paramedics: “It was a whole big thing. It was very interesting. Everyone just kept eating.”

Joan said the worst part was that he died before their dishes came: “I’d just ordered this really good salmon meal and I couldn’t eat it.”

She ate after she got home from the hospital: “We all mourn in our own way. I mourned with a great steak.” 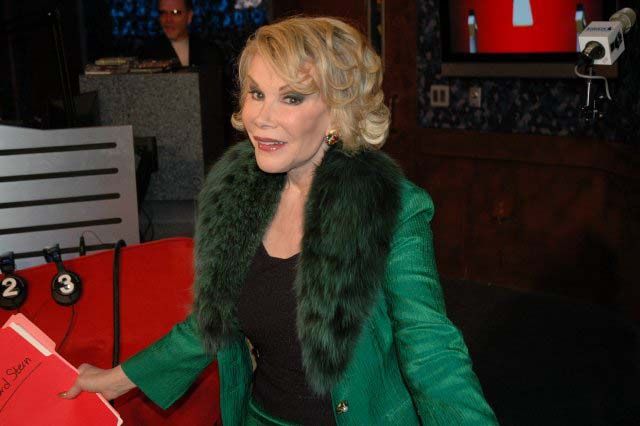 Howard thought Joan must have an opinion on Jay Leno’s return to ‘The Tonight Show,’ and Joan didn’t disappoint: “I’m so happy because I don’t have to take Ambien anymore.”

But she also had no sympathy for Conan: “The luckiest unfunny white man in America…I don’t find him funny. Maybe it’s generational.”

Joan didn’t have anything better to say about her own return–to the E! Network: “It’s shit money…but I love the work, Howard.”

Howard asked about ‘Mrs. Spencer,’ the ghost Joan believes once lived in her home, so Joan explained: “This is fourteen years ago when I first moved into the apartment.”

Joan has since discovered another ghost at another residence: “My best friend. Who I adored. He’s living in my house in Connecticut. He’s been seen by 4 different people.”