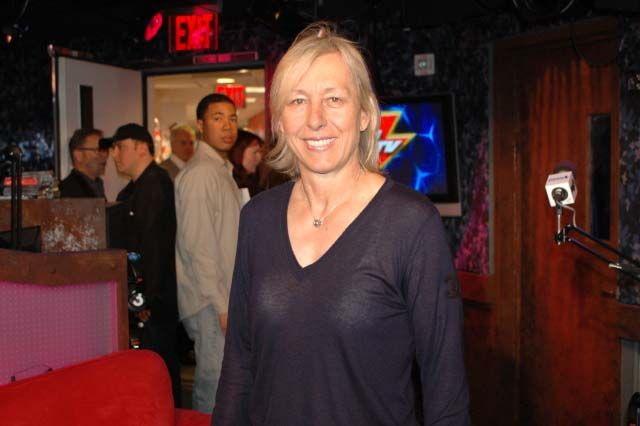 Martina Navratilova stopped by to say hi and Howard asked if she felt any current tennis players had a shot at surpassing her nine Grand Slam singles titles.

Martina thought for a second: “Roger [Federer]’s at 6. He could do it.”

Howard said he was sorry to hear about Martina’s breast cancer, and Martina replied that she wasn’t letting it ruin her life: “I came here to talk about breasts, yes.”

Martina said the diagnosis didn’t phase her: “I said ‘Ok, I don’t wanna lose my boob and I don’t want to lose my hair because I don’t have too much of either.'”

Martina added that she didn’t need chemotherapy–just radiation treatments–and planned to continue working as a tennis commentator during both her treatment and recovery.

Howard asked after Martina’s beauty queen girlfriend, but Martina didn’t want to talk about their relationship this morning: “It’s a work in progress.”

Before she left, David asked if she wanted to live out any last wishes before undergoing treatment for her breast cancer: “Any chance for a Sybian ride?”

Martina laughed: “I think I’ll pass on that.”