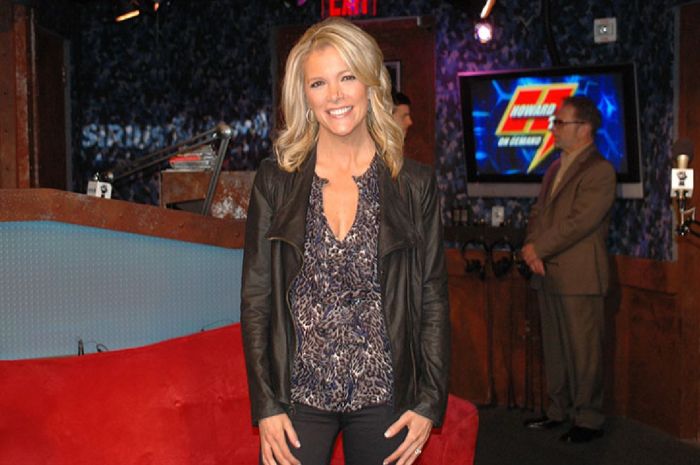 Howard welcomed Fox News anchor Megyn Kelly to the studio and complained that she wasn’t wearing the female Fox anchor uniform of a ‘crazy-short skirt’: “Why did you wear pants?!”

Megyn then told the crew that the Stern show haunted her broadcast career, as she was once on-set when a fellow broadcaster’s interview was ‘Baba Booey’d: “To this day I live in fear. Every time I’m having a good interview, I’m like, ‘Oh my god. Here it comes.'”

Megyn also told Howard about getting in locker room fights as a cheerleader (“There was some hair-pulling”), but refused to discuss her grooming/shaving habits: “I’m not talking about that…”

Megyn admitted that her sexy look wasn’t all her work: “They Foxify you over at Fox News.”

Howard said Megyn was a catch: “And she’s earning! Can you imagine? How many girls like this earn?”

At Home… And in the Bedroom

Megyn said she’d had trouble losing the weight after having her baby, but finally managed to drop the pounds after getting an assistant–and a nanny. Howard wanted to know if Megyn made the mistake of hiring a sexy nanny, so Megyn laughed: “I almost did! You know who wanted to be our nanny? Miss Maine!”

Megyn said her man didn’t have a wandering eye, though—he’s focused on her chest: “My husband calls them Killer B’s.”

Intrigued, Howard asked after Megyn’s sex life, but she demurred: “I believe in what Kevin Bacon says: ‘Keep the fights clean and the sex dirty.'”

Howard thought about it, finally deciding: “I believe it’s a sign of wildness in bed.”

Marry Sean Hannity (“He’s got the most dough and he’s the youngest, right?”), f’ Bill O’Reilly (“He wrote a book that had some saucy sex scenes.”) and kill Glenn Beck: “He’s doing alright.”