Hole singer visits the studio, though she's an hour late 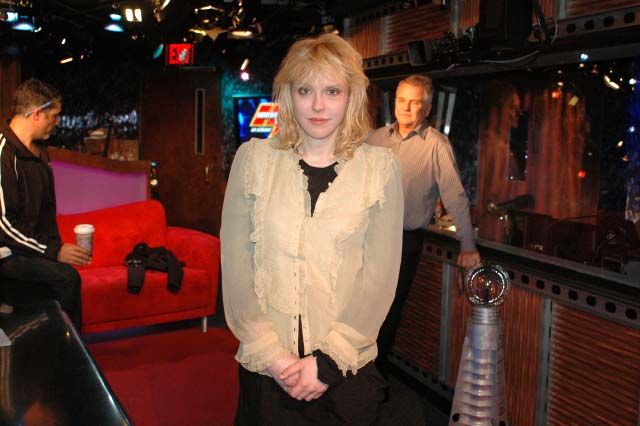 Courtney Love stopped by to promote her new album, ‘Nobody’s Daughter,’ and refused to explain why she was an hour late for the show: “Oh, I can’t on the air. I’m just depressed about something.”

Howard repeated that she was due to arrive an hour earlier, but Courtney seemed non-plussed: “Was I? I’m sorry.”

Howard had Gary bring her some coffee, which set her off: “I’m not shaky or anything!”

Howard begged off: “I didn’t say you were shaky. I can see you’re out of it.” But Courtney wanted to make an issue of it: “I’m not out of it! I’m not on drugs. I’ve just got a puffy face because I was crying all night.”

Courtney said she was in much better condition than her last appearance on the show: “Last time you saw me [was during] what we call the Letterman years and I was on C-R-A-C-K…I’m not ever supposed to say that word. My publicist told me not to say that word…I don’t like alcohol and I don’t like coke. Pills? Sure.”

She’s Back… On Her Back

She explained that she’d been celibate in an effort to be more productive: “I disentangled myself from all sexual and romantic relationships so I could make this bloody record.”

Courtney revealed that since she’d begun sleeping with an unnamed guy–the same guy who’d ruined her morning somehow: “Because I’m only in town for a minute…[he said]: ‘We’re having a fight. That means we’re too intimate.’ What?! We’ve had like five fights.”

Courtney blamed the issue on her limited pool of potential sex partners, telling Howard: “You have a huge pool. I have a little teeny espresso cup.”

Courtney told a story about hooking up with a sexually aggressive supermodel–based on the clues, including a British accent, both Robin and Howard guessed the same name–who’d chased her down in an unnamed Italian city: “I said to myself, ‘If you’re gonna do it, do it with this one.'”

The sex wasn’t very good: “I remember that it repulsed me some. The one-on-one-ness of it.”

The story, on the other hand, is something she’ll be able to tell forever: “I just remember waking up in the morning and looking at this face–I’m not going to say whose it was–but it was so feline and beautiful and I went–and she was asleep–and I said, ‘Oh my god. I’m going to have a story to tell my grandsons.'” 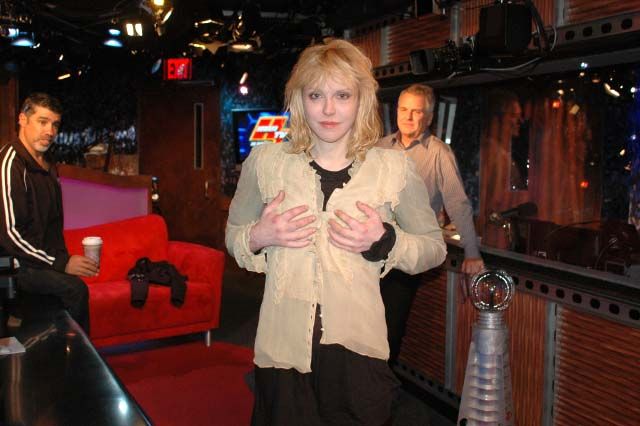 Courtney said that while she was rich (estimating her worth–in hundreds of millions–exceeds her IQ), she’d made some regrettable financial decisions, like selling off part of Nirvana’s publishing rights: “Emotionally I thought I was ready to do so but now I’m having second thoughts.”

The money that’s left is frozen somehow: “I can’t touch it because of the trust.”

If she needs something from the store: “They give me $300. My people.”

Courtney denied sleeping with Dave Navarro (“We’ve never gotten around to it.”) and Mickey Rourke (“God no.”) and Blur bassist Alex James: “All I did was spank him.”

Courtney said she had, however, slept with Bush frontman Gavis Rossdale–while he was dating his now-wife, No Doubt frontwoman Gwen Stefani: “He got good in bed. Something happened. Yeah, Maybe Gwen taught him, for all I know. I can’t imagine that but–but between point A and point B we were f’ buddies.”

Howard asked if Gwen knew Gavin was also sleeping with Courtney, but Courtney’s answer was unclear: “She sure does.”

Courtney said she really valued her relationship with Gavin: “He was an f’buddy in the sense that we didn’t have a lot of pressure on each other and–but we did like each other quite a bit.”

Howard asked why Courtney was estranged from her daughter, Frances Bean, so Courtney shrugged: “Probably just because she just has to be Frances and it sucks. It’s a lot of money. She has no dad. She has a cuckoo-bananas mom.”

Courtney added that a lot their problems stemmed from Frances’ education: “It’s not about me it’s about the fact that I need her to go to this one school to get into–the–Bard…she’s got to go to this other school to get into Bard.” The pair don’t talk in person over the phone: “We have spoken in–in–in sort of e-mail.” Courtney blamed most of their problems on money-hungry lawyers: “If she didn’t have money, this wouldn’t be happening.”