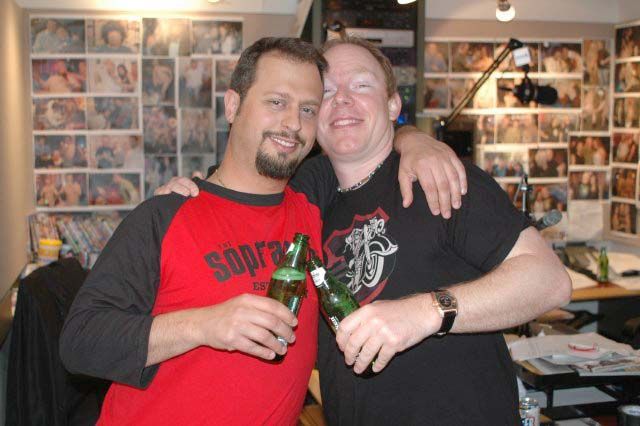 Howard started off the show playing clips from yesterday’s Wrap-Up Show in which Sal and Richard promised to act out at Robin’s charity event. Sal said he’d give the donors who paid to sit at his table quite a show: “If you want to light a fire, you need some gasoline.”

Gary asked Sal if he was bringing his ‘A’ game, so Sal had promised: “A, B and C, motherf’er.”

Robin questioned her decision to invite Sal and Richard to the event: “I don’t necessarily know if I want Sal to bring his A, B and C games.”

Richard came in to explain that he and Sal only planned to give the donors the ‘Sal & Richard’ experience they’d paid for: “It’s for a good cause that I’m getting shitfaced.”

Robin rescinded her invitation: “I don’t want to be bothered. The comedy’s supposed to be on the stage.”

Robin also questioned why Richard couldn’t drink for any other reason than getting drunk, but Richard didn’t understand: “Why else would you drink?”

Robin thought Richard and Sal were trying to sabotage the event: “There’s a passive aggressive thing going on there…I don’t want to drag anybody into anything.”

Robin said she was also upset with some statements Jason made about her charity work on yesterday’s Wrap Up Show, adding that she now understood why Will has distanced himself from the ‘Will & Jason’ partnership: “Will would like to be separated from the team and I can understand why.”

Howard asked if Jason was still a part of Robin’s old ‘Girl’s Night Out’ charity, and Robin confirmed it (“Since Girls Night Out is inactive, he can still be in it.”) but said she wouldn’t be asking for his help with the 15 Foundation: “I don’t want to bother him.”

Robin said she also wouldn’t be asking for any help from Gary or Jon Hein: “Again, I will leave them all alone.” I’m not mad at anyone.”

Gary said he wanted to help Robin, as she’s helped his charities many times before, but “I think that sometimes it’s confusing which charity you’re with.”

Robin insisted that she’d always been involved with multiple charities: “You act as if I was not this way before that…there simply has been a different level of activity in the last few months because I started the 15 Foundation.”

Is the Wrap Up Show to Blame?

Howard tried to blame the heightened tension over Robin’s charity work on the ‘performances’ the staff used to keep things interesting on The Wrap Up Show: “They’re trying to make something happen.”

Robin, however, didn’t believe that the staff was as good as she was at being a ‘character’ on air: “It’s who they are. The Wrap Up Show only exposes that. It’s nice to know who you’re working with.”