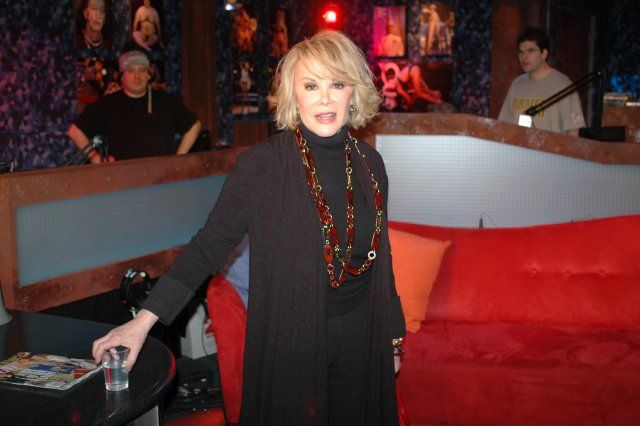 Howard welcomed Joan Rivers to the studio and told her he’d been depressed by the new documentary about her life, ‘Joan Rivers: A Piece of Work.’

Joan laughed that the movie had gotten rave reviews but “It hasn’t made a penny. I have a shit deal with them. Don’t talk to me about that f’ing movie.”

Joan said the movie focuses its attention on her financial struggles, explaining that her work ethic was born of necessity: “I supported the world…the people who work for me, I send their kids to their schools.”

Joan said she didn’t mind working so much–she actually wants to. She’s only happy on-stage: “I’m, like, consumed. I’m like a druggie.”

Howard said he was shocked by how much Joan showed the cameras: “I never saw you without makeup before.”

Joan laughed: “I never saw me without makeup before!”

At one point in the interview, Joan teared up, saying one of her biggest disappointments was how Fox went from supporting her late-night show one day to firing her the next. Through her tears, Joan confessed: “Thursday to Friday. I still can’t discuss it. Still can’t discuss it…can’t deal with it. Still to this day.”

Robin later speculated: “I think what she’s saying is, like, in a day they changed their minds about whether she was a hit or not.”

JD came in to agree: “She had to make a decision between her husband or the talkshow because the one guy at Fox…”

Howard finished for him: “Wanted to fire her husband?” JD nodded: “Yes.”