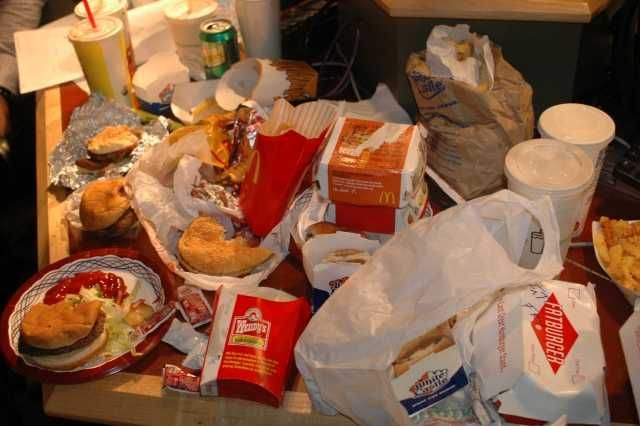 Wolfie called in with a few fast food trivia questions for Fast Food Show co-hosts Jason Kaplan and Jon Hein, so Jon and Jason came in to stand their ground. Wolfie’s questions, followed by the pair’s answers:

Name the standard 5 toppings on a quarter pounder with cheese. Jon could only name four: cheese, pickles, ketchup, onions. Jason didn’t think there was a fifth topping, but Fred claimed it was mustard.

Jason disagreed: “Not on the East Coast!” Jon said Jason was right. What is Wendy’s current slogan? Jon didn’t know.

Jason did: “You know when it’s real.”

Wolfie said it was actually “It’s better than fast food. It’s Wendy’s.” Jason told Wolfie to check his work: “Wolfie, I take umbrage with your research.”

What is the caloric content of a Big Mac? A: 375. B: 495. C: 540. Jason guessed correctly: “I’ll go with C.” Unsatisfied with the accuracy of Wolfie’s questions/answers, Howard ended the quiz early and moved on.

Eric the Actor Begs the Stern Show for a Job