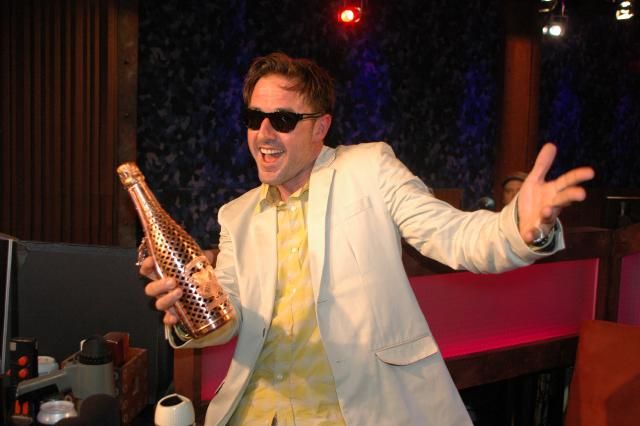 David Arquette stopped by with a bottle of fancy, sugar-free champagne to talk about his new nightclub–but Howard was more interested in the fallout that followed David’s last appearance on the show: “I didn’t even know if you were really going to come in with all this controversy.” David said he’d been advised against it: “Trust me. Everyone was like, ‘Don’t go. Please don’t go’…the whole truth thing? That didn’t work out so good for me. So today I’m going to be completely and utterly full of shit.”

David said he’d only commented when their plans for a private separation were spoiled (“We decided not to make a public separation.”) by paparazzi pictures of him with a Hollywood party girl. David laughed that he should’ve known better, as women have begun to prey on famous men to further their careers: “Rachel Uchitel should sew up her vagina. Just sew it up and go home.” 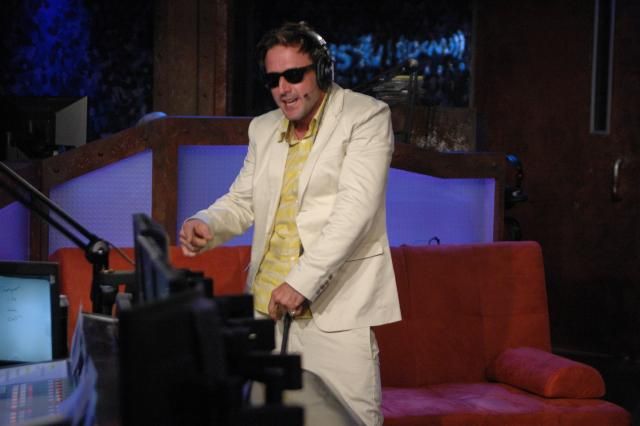 Howard commended David’s last appearance, saying “I thought it was refreshingly honest”) but David thought he’d crossed a line: “Some of those details were too personal.” For example, David said he was partially at fault for what he’d called a “mundane” sex life: “It was my fault as well. I wouldn’t get off the bed to kiss her.”

David said their sex life wasn’t the whole problem: “There’s also aspects that make Courteney uncomfortable. I’m very boisterous. I go out there [and] I’m the life-of-the-party guy. And sometimes it rubs her the wrong way…I was always saying to Courteney, ‘You don’t understand, I’m a live wire and you ground me. I get crazy when I’m not with you.'” He’s since found that same calm just hanging with his bros: “I’ve found different ways to ground me.”

Courteney Was a Little Upset 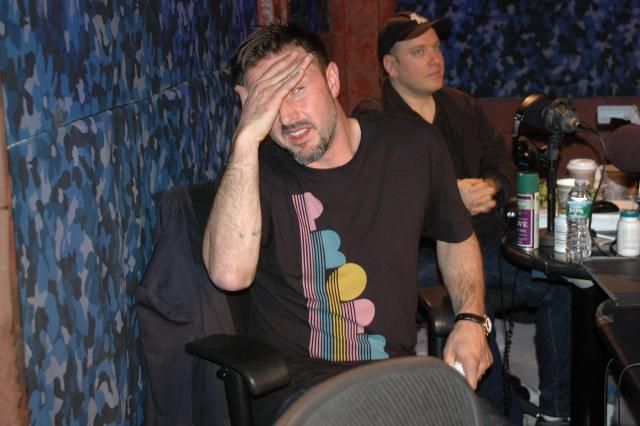 Howard asked if Courteney confronted him after the interview, and David nodded: “It happened…it was actually in our therapist’s office. She came in and got really pissed. We talked it all out. I apologized for the parts that were too personal. Then we took a walk and it was great.”

Howard thought it sounded like David took it up the ass–David laughed: “Yeah! I took it right up the shitter! It was awesome.”

David said he’d been using hip-hop to deal with his personal turmoil: “You know what’s really been getting me through this? Rap music.” David cited the music of Vinnie Paz as particularly restorative: “I go to places and I’m dancing now. I want to f’ everything. I mean, I’m not. But I go out and I go crazy.” Fred cued up some of Vinnie’s music so Howard could hear it, and David immediately started dancing. The rest of the crew joined in, dancing with David as he encouraged Robin to let loose: “Show me your big milkers!”

David got so excited, he removed his pants and gave Robin a lapdance, later enthusing: “See what rap music does? It gives you stroll. It gives you swagger. You dance. You exercise. You pull your dick out…I don’t necessarily want to party.”

He’s Still in Love With Courteney

David hoped that he could patch things up with Courteney: “The fact of the matter is I’m still f’ing in love with my wife. That’s the bottom line.” To that end, he’s actually trying to see her less: “You keep it like that and maybe she’ll miss me more or whatever.”

But David said he wasn’t sure it was the right plan: “She was just feeling very lonely in our relationship…I was watching [too much] UFC.”

Could Aniston be Next?

David confessed that he wasn’t dealing with the separation well (“I’ve been drinking a little more than [usual].”) so Howard encouraged him to find solace in Jennifer Aniston’s bed: “You want to pull off the biggest scandal of all time? Bang her.”

David flatly refused: “Not right, not good…no. The greatest move would be if I go and steal Angie [Jolie].”